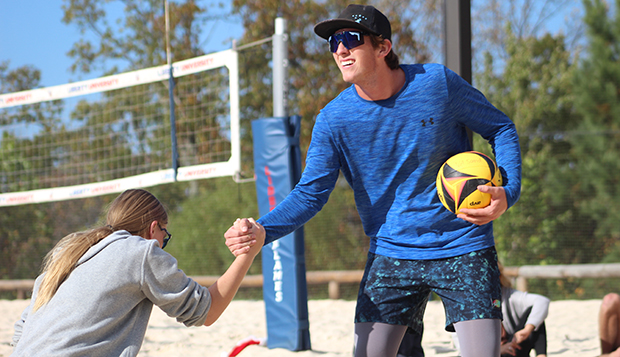 Between the open competition on the four Liberty Mountain Intramural Complex courts and AA and A brackets played on the four East Campus courts next to the Liberty field hockey and lacrosse fields, the final beach event of the fall semester attracted a total of 33 teams made up mostly of Liberty students, with a few members of Head Coach Kaleb VanDePerre's VA Sand club team mixed in.

"It was good to see them mix it up with the indoor and the beach girls," VanDePerre said.

In the open division, Flames junior Tommy Speelman, a setter on the men's indoor team, joined beach volleyball freshman Lizzy Armstrong to finish 4-0 in pool play before sweeping their semifinal match and overcoming VanDePerre and VA Sand player Erin Johnson, 18-21, 21-18, 15-12, in the final.

"We just started playing a lot better and came back strong," said Speelman, who closed out the match with an emphatic spike that landed inside the baseline. "This was our first time ever playing together, but we had beaten them earlier in the day (in pool play) and we just picked it up and knew what we had to do. It was a fun match. I'm glad we got to play."

VanDePerre and Johnson had overcome Liberty alumnus Zach Martyn and his VA Sand partner in the semifinals, but ran out of steam in the championship match.

"We came back in the second game and lost, and then in the third game we had a big lead and it was gone," VanDePerre said. ‘With the amount of energy I had left, I was not very confident that we were going to get points. I couldn't score."

In the AA bracket, Nathan Knickerbocker and Ina Aoelu teamed up to sweep Ethan VanDePerre and Kylee McGuirk, 21-18, 21-14 in the final, while Stephen Leong and Laina Marble ousted Quinten Lackey and Allison Reda in the A championship match.

Prizes were awarded to the winners and the teams with the best costumes, which most shed before competing in the tournament.

"They've been one of the main three teams in our conference, so it would be good to see our girls play another collegiate program," VanDePerre said.