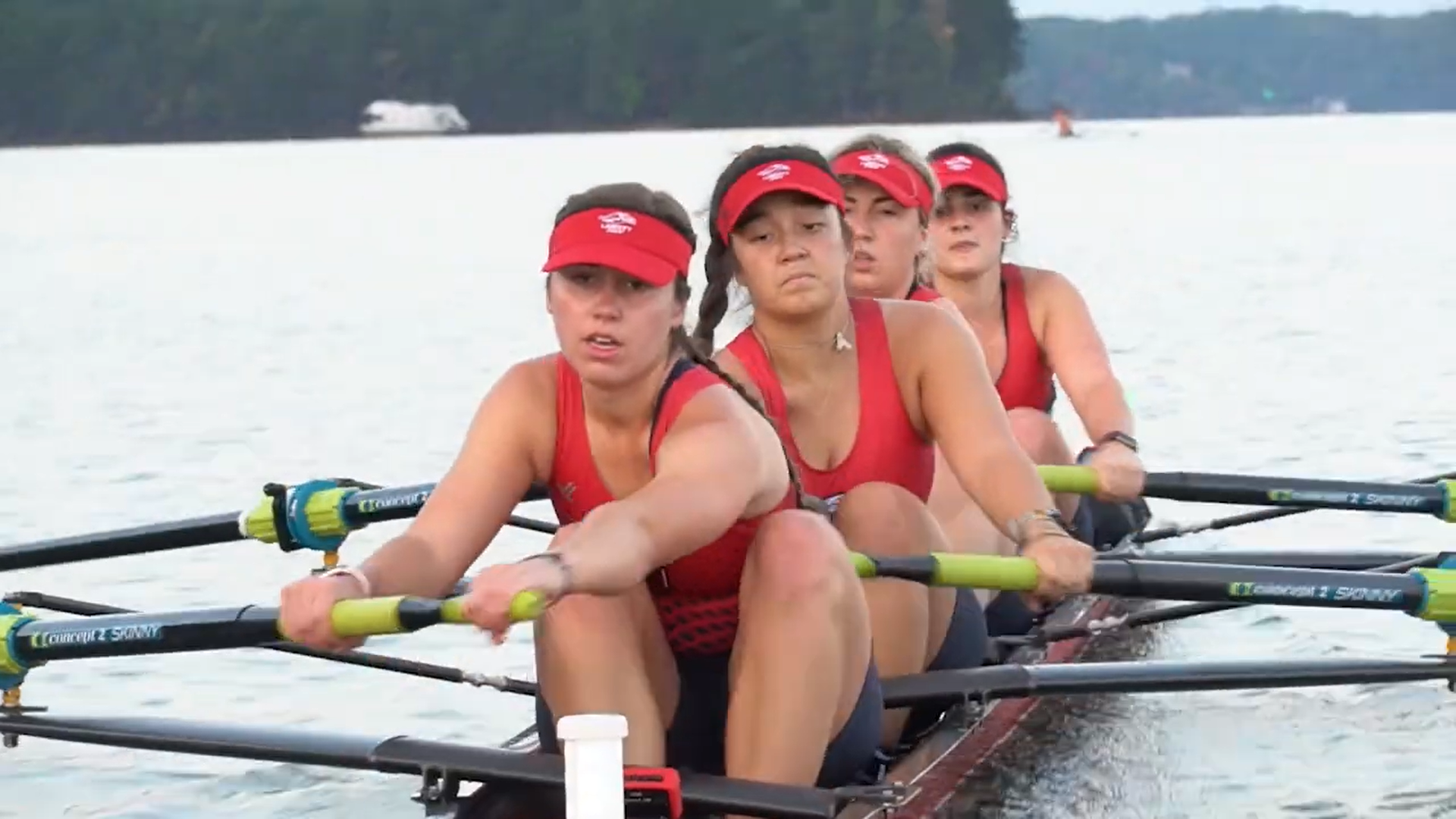 A Lady Flames four-woman crew power their way through the water on Smith Mountain Lake. (Photos by Patrick Strawn)

The life of a rower or coxswain on Liberty University's crew team requires tremendous time management, commitment, and self-sacrifice. In return, student-athletes reap rewards in and out of the boat as they pull together as one body toward a common end goal.

"Getting up early and getting on the water in the dark, it does take a lot of dedication," Liberty Head Coach Debbie Prowse said. "It's just what you've got to do to be successful in the sport — you've got to put in the time."

"If we don't have every person in the boat here for practice, then we can't practice, so the level of commitment and dedication to the team has to be very, very high," Lady Flames junior Lindsay Bicknell added. "The past two years, we've had a very dedicated team that we've seen a lot of growth from just because they've been here, getting up at 4 a.m., showing up, and working hard out here for four hours in their morning. It really does pay off."

After holding tryouts in early September, the team has put in nearly two months of practices on the water — out of its boathouse at Smith Mountain Lake — as well as on indoor ergs set up in the shared crew and taekwondo room as well as weight room workouts in the new Club Sports Training Complex.

"All of the major regattas we would have participated in during the fall were canceled, but we are continuing with our regular practice schedule with two weight training sessions, one erg session, and four water sessions per week, from 6-8 a.m. Monday through Friday," Prowse said. "We are trying to work on technique, getting everybody rowing together. We are learning new skills on the water, which has been a lot of fun, and we are enjoying the workouts and getting everybody back into shape."

Those who have answered the early morning wake-up calls and made the 30-minute commute by bus have witnessed more than their share of spectacular fall colors as the sun has risen over Smith Mountain Lake.

"We have had some really pretty sunrises and spent a lot of time in the morning on the water, when it is not very windy and good conditions for rowing," Prowse said. "As it has been getting lighter later every morning, we have taken extra precautions with lights and radios on to maintain safety when we are out on the water."

Prowse said the newcomers on the team have caught on quickly, through much perseverance.

"To learn the full stroke, it does take time," she said. "You have to be very patient. You have to be dedicated. Even through it's one repetitive motion, there are so many components and so many little nuances to learn. For some of our novices, it can get frustrating (because) they're learning so many things at once."

The returning varsity team members have spent much of the fall season practicing the technique of skulling on one- and two-rower boats.

"Instead of sweeping with one oar (in a four-seat boat), they're learning how to skull with two," Prowse said. "To not have the pressure of racing on us and really take the time to enjoy the actual sport of rowing and the process of learning something new has been really beneficial and good for us."

Practices will move indoors for the month of November before rowers will be mostly on their own to maintain their conditioning through extended Thanksgiving and Christmas breaks as they gear up for long-anticipated spring regattas.

Though the annual Colonial Erg Sprints in Williamsburg, Va., in January have been canceled, the Flames and Lady Flames rowers do have at least one regatta, on the Schuylkill River in Philadelphia, scheduled for the spring before competing in the Southern Intercollegiate Rowing Association (SIRA) championships in Oak Ridge, Tenn, also site of the May 21-23 American Collegiate Rowing Association (ACRA) nationals.

"Missing our (2020) spring season and then also not having a fall season … has given our novices a lot more time to learn the sport and get familiar with the technique instead of rushing into races right away," Lady Flames senior Joanna Moran said. "So when it does come time to race in the spring, we're going to be very well prepared because we have taken advantage of this time to really get together as a team and work hard."