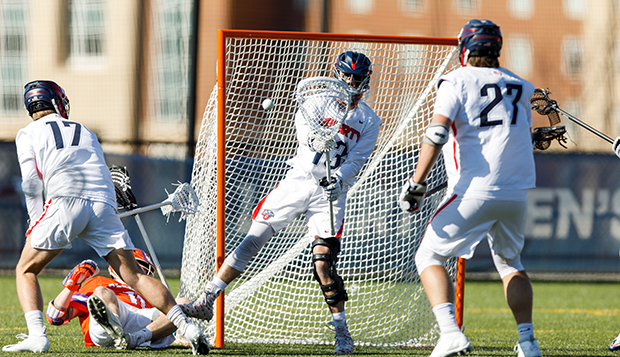 Liberty senior goalie Ryan Reynolds makes a save between defenders Reese Hintz (17) and Reagan Pritchett (27) in a game against Clemson last season. (Photo by Chase Gyles)

A week after Liberty University's men's lacrosse team plays its first intra-squad scrimmage this Saturday at 1 p.m. at the Liberty Lacrosse Fields, the Flames will have the opportunity to host the University of Virginia's club team and new Atlantic Lacrosse Conference (ALC) member North Carolina State in their only fall scrimmages on Nov. 7, starting at 1:30 and 5:30 p.m., respectively.

"I love the idea of being able to apply what we as coaches and players learn (from Saturday's intra-squad) going into a final scrimmage, and to give ourselves a little test," Liberty Head Coach Kyle McQuillan said. "To be unified in preparations to face a common opponent (rather than themselves) will be a great way to end the fall season."

Earlier this month, the Men's Collegiate Lacrosse Association (MCLA) released a preseason poll for the ALC and Liberty debuted at No. 1 with seven of the eight first-place votes, followed by longtime SouthEastern Lacrosse Conference (SELC) Northwest Region rival Virginia Tech at No. 2. NC State came in at No. 5 out of eight teams in those ALC rankings, behind No. 3 Clemson and No. 4 West Virginia.

"Preseason polls are fun, and it's a good way to start generating some interest and optimism for the upcoming season … but they are not very accurate," McQuillan said. "Last year, the season ended before teams were able to find their stride and we didn't get a full picture of what they were capable of."

Amid the pandemic, he expects some schools to be more prepared than others going into MCLA action in the spring.

"With COVID and school changes and cancelations, there are potential transfers and players taking advantage of their fifth years of eligibility, so basing a team's ranking off its success last season or roster from a year ago, which could be vastly different now, is difficult," McQuillan said.

He said the hotbed for lacrosse has shifted somewhat over the past decade from the Northeast to the Southeast.

"Teams in the MCLA on the East Coast continue to strengthen, and Raleigh (N.C.) is a part of the country where lacrosse has continued to take off, develop, and get better," McQuillan said. "I hope we can do the same and continue to be competitive in our conference and across the country. Ultimately, we are going to have to prove it on the field."

Liberty will host the inaugural ALC Tournament on May 1-2, with the champion earning an autobid to the May 10-15 MCLA National Championships near Austin, Texas.

"NC State's going to be a team we are going to have to go through," McQuillan said.

The Flames and Wolfpack will have at least five showdowns in various athletic arenas this fall. Liberty's ACHA Division II men's hockey team will face NC State, Nov. 6-7 at 6:30 p.m. at the LaHaye Ice Center — after the Flames' ACHA DI men's hockey team hosted the Icepack in an Oct. 23 season opener and before the football team travels to play the Wolfpack on Nov. 21 in Raleigh, N.C.

For this Saturday's intra-squad match, which will be streamed live by LFSN's broadcast team, McQuillan and his assistant coaches and players have collaborated in splitting the Flames' 40-man roster to form two squads with a balanced mixture of upperclassmen and underclassmen to showcase matchups that will best assess the team's strengths and weaknesses.

"It has been a little bit different in terms of preparation, splitting guys down the middle and trying to create competition throughout the week to prepare for a practice game," said McQuillan, who wants it to be as accurate a simulation of a game as possible to prepare the Flames for their first intercollegiate contest. "We're going to try to do everything at the same level, including referees and shot clocks and a start time, to make it a real game experience, with an emphasis on finding out what we need to improve on."

He said it will give newcomers and reserve players a shot to show what they are capable of.

"If everyone's healthy, we should have 20-man split squads which will give players a lot of minutes, compared to when we play games and a lot of guys don't get on the field," McQuillan said. "For guys who may not agree with where we've got them on the depth chart going into the spring season, this Saturday will either confirm we have them pegged right," or prompt them to reassess their talent pool.