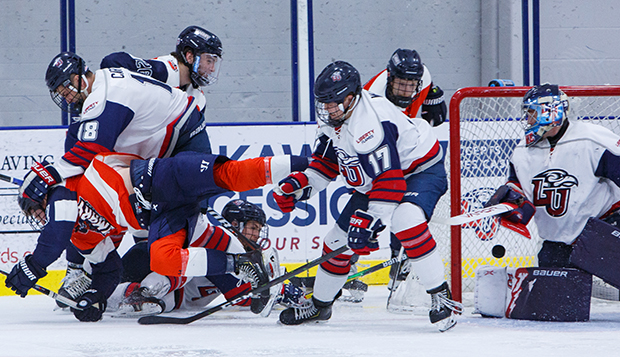 Liberty University's ACHA Division II men's hockey team, which ended the 2019-20 season ranked No. 1 in the Southeast Region, opened this year's schedule by playing three tight contests against the University of Mary (N.D.), the top-ranked team in the West Region, Thursday through Saturday at the LaHaye Ice Center (LIC).

After tying the Marauders (7-1-1) in Thursday night's series opener, the Flames (0-2-1) lost Friday afternoon's rematch, 3-2, before giving up two empty-net goals in the last 75 seconds of Saturday night's 4-1 series finale.

"In all three games, we were either tied or down by one goal with a minute to go," Liberty Head Coach Ben Hughes said. "You can tell Mary has a lot of experience. It is a very mature team that is very smart and moves the puck very well. I was happy with our guys for the most part. Our strength is our skating and our speed and being able to push the pace on teams and overall, I think we did that. We got better defensively throughout the weekend but there were some things we know we need to work on a lot more."

At the top of that list is special teams as the Marauders converted 25 percent of their power-play opportunities while holding the Flames to a 6-percent success rate.

"Overall, if you take out the special teams play, it would have been a different result," Hughes said. "That's why they came out on top. When you get to nationals to play the top teams, the differences are so minute that it's probably going to come down to special teams."

"We have got to move the puck better and quicker on the power play," he added. "We were trying to be too creative and have too many different looks. Sometimes you've just got to go back to the basics."

Mary scored first in Friday's second game on a goal by captain Zach Garrett with 7:33 left in first period. The Flames tied it up at the 5:15 mark on junior forward Josh Malin's rebound of a shot by graduate forward Jerrell Campbell.

The Marauders seized a 2-1 lead with 7:07 left in the second on a perimeter shot off the stick of Kyler Moore before Liberty junior forward Tim Doe knotted it at 2-2 just 33 seconds into the third period off assists from sophomore forward Luke McFarlane and senior forward Blake Flanders.

Garrett netted the game winner for Mary on the power play with 5:07 remaining in regulation.

Flanders opened the scoring in Saturday's third game by finishing a feed from McFarlane with 17:39 left in first period.

"McFarlane won a down-low battle behind the net with two Mary players and came out with the puck and fed it to Flanders in the slot for a one-timer," Hughes said.

However, Moore scored the next three goals for the Marauders, the first two with a man advantage midway through the first period and with 2:31 left in the second and the third an empty-net goal with 1:15 to go.

Dakota Cyhaniuk played all three games between the pipes, including Thursday's 15-round shootout, due to fellow junior goalie Adam Partridge being sidelined by injury.

"He stepped up and played all three games extremely well," Hughes said. "We feel really confident about having him as our starting goalie moving forward."

The Flames will conclude their fall semester of competition with a two-game series on Nov. 6-7 at the LIC against the same North Carolina State team that Liberty's ACHA Division I team opened its season against this past Friday at home. The Icepack prevented the DII Flames from advancing to the 2019 ACHA National Championships in Dallas with a 4-1 setback in the Southeast Region tournament final before dealing Liberty a 5-3 loss, its first of the season, in a showcase last season.

"We are excited about it," Hughes said. 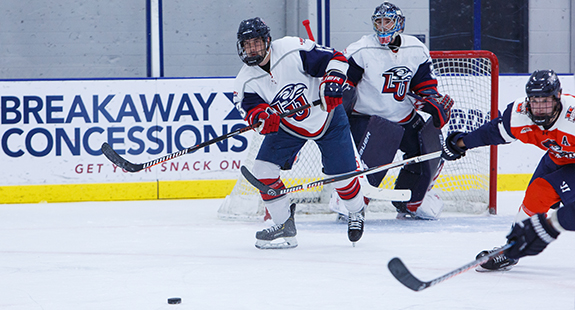