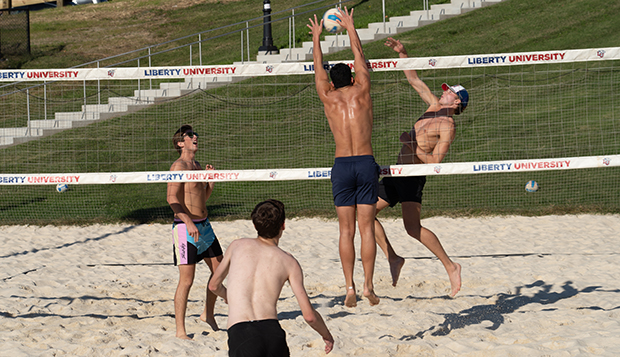 Since finalizing the 24-man roster for Liberty University's men's volleyball team in mid-September, Head Coach Kaleb VanDePerre has stretched his players by mixing practice schedules between the indoor hard courts and the outdoor sand courts for cross-training purposes.

Additionally, the Flames have worked out as a team every Monday and Wednesday with Club Sports Strength & Conditioning coaches Ross Garner and Duncan Hundley in the 3,600-square-foot weight room in the new Club Sports Training Complex.

The players have responded, taking their games to new heights through the optional beach workouts and mandatory strength and conditioning sessions.

"Beach translates almost directly to the indoor game, only you have more control and you think more," junior middle hitter Lucas Marine said. "Once you get back on the indoor court, you can move faster and jump higher, because you're used to the sand. It's awesome."

As the Flames return to primarily indoor practices, they are seeing positive results.

"The beach has helped me elevate my game a lot," junior outside hitter James Morton said. "I've always relied on physicality, being able to jump high. But just being able to learn beach and get that control has given me a lift. The indoor game is such a fast-paced game compared to outdoor, but (the sand courts) provide a place for us to learn control and consistency. It is definitely a benefit."

He said the Flames made the most of their offseason through the pandemic and returned to campus with renewed energy and focus on their goals for the upcoming spring.

"This was definitely the best offseason we have had," Morton said. "Kaleb (VanDePerre) has such a passion for volleyball, but especially beach volleyball, so this summer he was able to keep us motivated and passionate about the sport. Now we're coming back to indoor and we just want to get back to hitting harder and harder because we have grown so much in our game. We have kind of picked up where we left off. The past two years, we have not had this intensity yet. We're playing at a level where it's competitive volleyball."

Liberty returns the majority of its team that was peaking for the playoffs when COVID-19 dashed its dreams of possible ECVA South Conference, East Coast Regional, and National Collegiate Volleyball Federation (NCVF) National tournament championships.

"It was super frustrating at the end of last year because we were a good team," Marine said. "We still think we have all of the tools it takes to win, so now it's just keeping practices competitive."

"We have a great group of guys," Morton added. "We have almost everyone coming back, which is awesome to see, and the freshmen just come here ready to play and ready to work. It's been a fun preseason. You make do with what you have and this season's definitely different, but it's just a blessing to be able to play. We're just thankful for that opportunity."

Both Marine and Morton played beach tournaments with junior setter Tommy Speelman this summer, with Morton also teaming up with junior outside hitter Cross Edwards.

"It's been fun to play with different people on the team and grow the team bonds with each one of them," Morton said. "We are just kind of mixing up teams (indoors), working with different guys, so it's cool because we get that intensity in practice where we are going against somebody we wouldn't normally go against and they challenge us in different ways than we are used to."

"We have a really broad scope of players and some of the new guys are looking very promising," Morton added.

Marine said the influx of newcomers has helped the veterans to stay sharp and set high standards.

"All of us upperclassmen understand how important it is to pass on the winning culture, the Liberty men's volleyball culture, and that's one of the reasons the intensity's going up in practice," he said. "Now the freshmen see the greatness and they strive for it and that makes us strive to be better, to keep being good examples for them. Just playing against each other, we're all super competitive so everything's a competition, to see who's better."

Marine said the team has taken up the mantle from the one graduating player lost, fifth-year setter Kaden Knepper, a second-year assistant coach on the Lady Flames' NCAA Division I indoor team.

"Kaden brought the sense of physicality needed, the sense of hustle," Marine said. "Now that he's gone, all the guys have picked up on that. That competitive edge is there now and we know what it takes now to win. Liberty is going to be a scary team to play. We feel like we're the premiere club team in the nation right now. The only thing we're waiting on now is opponents."

VanDePerre is still trying to set up a Midnight Mayhem opener to the spring schedule in the new Liberty Arena, with a current capacity of 650 students in the 4,000-seat venue due to COVID-19 restrictions.

Marine said the Flames are striving to maintain consistency in practices that will carry over to the spring competitive season, all the way through the NCVF National Championships in Minneapolis in early April.

"We plan on peaking and not going down," he said. "A lot of teams will peak right before nationals (or) at nationals. We want to be that team that's consistently good, so if you play Liberty, you know you're getting their A game and you know you're going to have to play your best."

VanDePerre has yet to determine Liberty's Division I and II rosters, but Marine said the Flames' DII team will be even stronger this year than it has been in the past.

"Our DII team's like our farm system," Marine said. "Obviously, some guys will never play DI, but that's the mindset and the goal for most of these guys, to never stop getting better and to be interchangeable with the DI team."