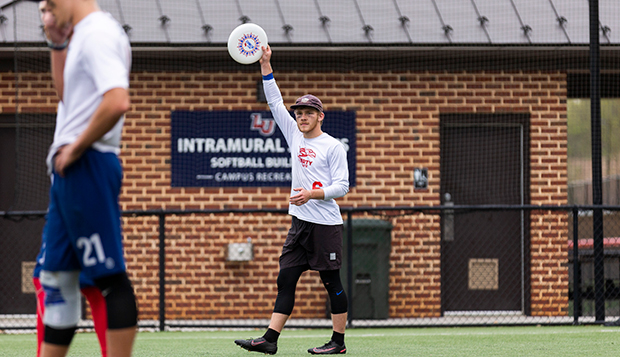 Senior captain Jake Norman prepares to huck the disc downfield to start a point at the Liberty Mountain Intramural Complex.

In its first and only competitive contest of the fall semester, Liberty University's men's Ultimate team overcame a 19-man alumni team in Sunday afternoon's 90-minute showdown at the Liberty Mountain Intramural Complex, winning 12-7.

The Flames combined their 13-man "A" team and 8-man "B" squad, made up mostly of freshmen recruits, to form a 21-man unit that played together for the first time and started to find chemistry in the decisive victory.

"It was a great game," Flames second-year Head Coach Kevin Habermas said after the first win over an alumni team in five tries. "Normally, the alumni team has beaten the current team pretty solidly. For the first time ever, the current team beat the alumni, which was good for us. It was a complete team effort. Everybody played extremely well, the best I've ever seen us play as a team. We were extremely patient, made really smart decisions, didn't make many mistakes, and capitalized off the alumni team's mistakes."

He was impressed with the leadership of team captains Jake Norman, Dan Mills, and John Simmons as well as fellow senior Noah Willson and graduate cutter Joel Slaughter, who earned team MVP honors.

"Everybody played and everybody played well," Habermas said, noting that former team captain Josh Sumpter, who graduated in May, traveled the farthest for the contest, flying in from Arizona. "It was great. We keep in pretty close contact with the alumni, with (Lady Flames Head Coach) Jonathan Mast and Hayden Bibby running the ship there and Luke Laubscher receiving MVP honors."

Habermas said the action got a little heated at times, with some good-natured trash talking and physical collisions on the field, but the players reconciled and made amends in the end.

"It was exactly what we expected, a tightly-played game with good spirit overall, but some chippy moments," he said, noting that players from both sides shared fellowship over lunch afterwards. "The guys kept their cool and discussed the foul calls and moved forward. It was encouraging on every level of the game."

The results showed Habermas and Assistant Coach Brandon Lison that the players are paying attention during practice.

"It was a good litmus test to see where they stand," he said. "Things are starting to click for the first-year players and returners, so it is encouraging for the coaches to see their work pay off. Now Brandon and I can go back and talk about strategies to work on in preparation for the spring."

The Flames, who are celebrating their 10th season as a program this year, have made the most of their opportunities to practice together this fall as they gear up for intercollegiate competition again.

"It's excited to be out with the team, given the circumstances, being able to practice when a lot of teams aren't able to practice this year," Norman said. "I'm looking forward to it. We had a lot of good, athletic kids that came out and we have a lot of great returning players. This is kind of the year we've been building for this year."

Simmons is thankful to be back on the practice field after Liberty had its Virginia Conference and East Coast Regional tournaments canceled by COVID-19,

"Being back with the team kind of brings back a sense of normalcy to our college life," Simmons said. "We're all super into playing Ultimate, so having that consistency where we have a fun outlet to go to throughout the week is awesome. My college life is super busy, but I keep coming back because I love playing with these guys and love doing what we do out here."

Habermas is hopeful his players can carry confidence over from the success they experienced early in this past spring season.

"We're looking forward to hopefully pick up where we left off last semester before everything kind of stopped," Habermas said. "We were getting a lot of momentum, beating some good teams last spring, and we're looking forward to building off of that and building a program that we can be proud of at Liberty and representing Christ on the road … with our attitude, while also being competitive."

Norman said the returning players have helped the incoming freshmen adjust to the speed of the college game.

"Right now, (our leaders are) pushing people and really going at each other in practice, like iron sharpens iron," Norman said. "That's really what we want to build and develop here as a program. We're already seeing returns on investments in younger players, so it is cool to see."

He is hopeful the Flames' seniors can conclude their careers on a high note, potentially with a first-ever trip to USA Ultimate's Collegiate National Championships.

"We're building for this year for a long time," Norman said. "It's my senior year and a lot of our core group's senior year or junior years, so we're really looking forward to this spring. We'd like to give people a run at regionals and hopefully make nationals. Anything can happen on Sunday at regionals if we (reach finals)."