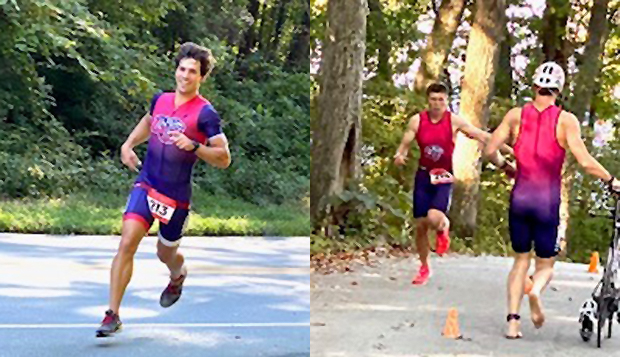 "It was a terrific day for Liberty," third-year Head Coach Heather Gollnick said.

Giovanni Bianco, who returned for an additional year of graduate study after completing his master's degree in human performance last summer, edged fellow graduate student Mark Fairley for the top podium spot in the men's open race, completing the 750-meter swim, 20-kilometer cycling stage, and 5K run in 1 hour, 3 minutes, 15.3 seconds. He posted the fastest time on the bike (31:35) and second fastest times in the swim (11:04) and run (18:58).

"It was amazing to be back racing and back with the LU Tri Team," Bianco said. "It's been a rough year for many but being able to compete was such a blessing.  The team environment that Coach Heather has created is beautiful and it's inspiring seeing so many new athletes join the team. I thank God for this awesome opportunity and give Him all the honor and glory."

Fairley, who serves as a graduate assistant on Liberty's NCAA Division I men's cross country and track and field teams, was a close runner up in 1:03:41, despite beating Bianco out of the water in 10:34 and finishing the race with the fastest run time (18:42). He lost more than a minute in the cycling leg, clocking the second-fastest time overall in 32:40.

"I am so proud of Taylor," Gollnick said. "She worked tremendously hard all summer and to see that hard work translate to today's success, winning both the collegiate and overall women's titles, was simply remarkable."

"I am thankful for the opportunity we had to race," Villani added. "It is so fun to be able to see all the hard work from training pay off."

"We were very proud of the seven new athletes who finished their first triathlon today," Liberty Assistant Coach Todd Gollnick said, noting that since triathlon is not a high school sport, he and his wife recruit mostly successful prep swimmers and runners before developing their cycling skillset. "It's a formula that's working as our team is growing and accomplishing new goals daily."

Heather Gollnick said the first and only competition of the fall semester was a fantastic experience for all of her competitors who made the trip.

"Most of our athletes commit upwards of 15 hours of training per week," she said. "Their reward is the competition, and I know how grateful they all are for the opportunity and truly consider it a blessing as not all teams are as fortunate to compete in 2020. I am beyond thankful and truly feel blessed for the support we receive from Club Sports and Liberty University.  We consider it an honor to represent Christ, Liberty Club Sports, and our great University." gave them extra i

The Flames and Lady Flames have plenty of incentive to maintain and increase their conditioning levels in preparation for the March 6-7 Clermont (Fla.) Classic and April 9-10 USA Triathlon Collegiate National Championships in Tempe, Ariz., in the spring semester.