Veteran leadership will guide Lady Flames on road to Boston 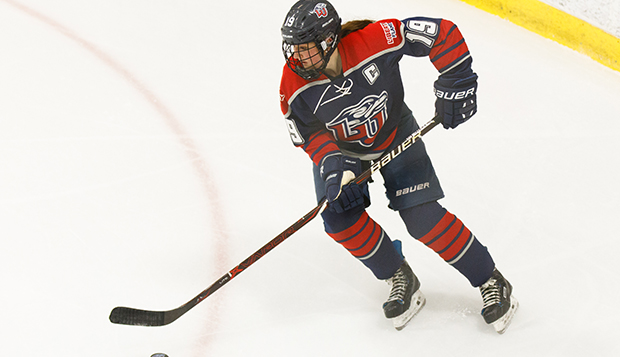 Senior forward Shannon Fehr, who missed the first half of last season, returns to lead the Lady Flames in 2020-21. (Photo by Luke Bobbey)

Liberty University's ACHA Division I women's hockey team has the leadership in place to continue its national championship reign, which started in 2018, Head Coach Chris Lowes' first season at the helm.

The Lady Flames were crowned champions again in 2019 before being denied a chance to three-peat this past spring when the ACHA DI National Championships were canceled by COVID-19 in mid-March. That was the week after they won the inaugural Women's Midwest Collegiate Hockey League (WMCHL) tournament at the FSI Sharktank in St. Louis, featuring six teams ranked in the ACHA DI top-10.

"I'm really excited about the group we have," Lowes said. "We have a real nice balance of veterans and a pretty exciting freshman class. We have such a strong group of captains and then also supporting leadership. They know what it takes to be successful. They know what we're looking for and what we expect out of our team."

After having her 2019-20 season cut short by injury, senior forward Shannon Fehr returns as captain of the Lady Flames.

"We are so excited to have Shannon back on the ice," Liberty Assistant Coach Madison Pinel said. "She has been working very hard to get back to the level where she was. It's taken a lot of commitment and drive to get there."

"She's been a big part of our team for the last two seasons … and a big part of our championship run who competes every day on and off the ice," Liberty Assistant Coach Justin Forth said of Polson. "She's a good leader off the ice. She's quiet, naturally, but the girls look up to her and she's all business on the ice."

He said bringing DeMerchant and McLeod as well as fellow graduate defenseman Deena Birney and forward Alex Smibert back for their fifth seasons of eligibility will help provide the veteran poise under pressure as the Lady Flames enter the stretch run through the postseason in the spring, culminating with the ACHA DI National Championships in Boston in mid-April.

"It's just awesome because it gives the senior class and junior class one more year to watch other leaders play," Forth said. "Playing another year together is just going to strengthen our senior class this year because they have people to go to. It's not 100 percent on them."