Triathletes thrilled to be back training toward common goals 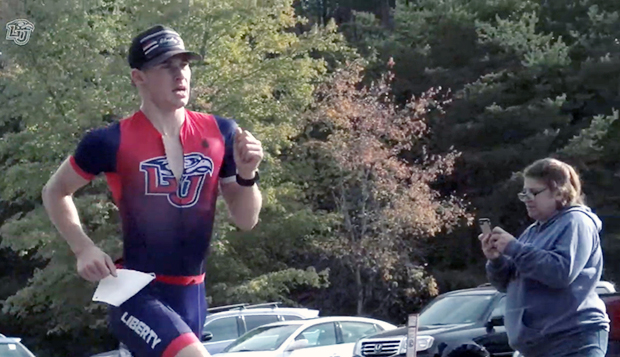 Junior Max Galbraith returns on a team that has its sights set on USA Triathlon Collegiate Nationals in Tempe, Ariz.

Utilizing outdoor facilities such as the Matthes-Hopkins Track Complex and the lake at the Hydaway Outdoor Center, Liberty University's triathlon team has hit the ground running and returned to practice at full speed for a promising 2020-21 season.

"It's great to be back on campus, the energy's amazing," said third-year Head Coach Heather Gollnick, who was unable to take her triathletes to Tempe, Ariz., for the USA Triathlon Collegiate National Championships in April. "The athletes are super excited to be training once again with their friends, especially after an abrupt end to last season."

"It really is exciting, but it also is a privilege to be back here on campus with the team," added Flames sophomore David McCurdy, who spent much of his offseason training solo in the three phases of triathlon. "The positivity and all of the energy that comes from running right next to your teammates and going out for a morning swim ... Nobody wants to get in the pool at 6:30 a.m., but doing it with your team is so much better than doing it alone. I wouldn't trade that for anything."

Lady Flames junior Isabella Dotlich said the competitive yet spirit-filled culture that Gollnick and her husband, Assistant Coach Todd Gollnick, have created within the team has inspired the student-athletes to spur one another on to faster times.

"Everybody is excited to start training again and they're pushing themselves to get better," said Dotlich, who is looking forward to traveling to Arizona with a select group of teammates in mid-October for the Collegiate Club Cup. "We have been training so hard over the summer and being able to look forward to a race is so exciting. There are so many new members to the team and this is something that they are looking forward to, too, so I am excited to experience that with them."

"As an athlete, we love to train, but we train to race, and now having that given back to us, that ability, I'm overjoyed," McCurdy added.

He sees a bright future in store for the Flames' and Lady Flames' freshmen starting this fall.

"They're coming in with so much excitement, so much enthusiasm, so much energy and raw talent, many of them," McCurdy said. "When they are pushed in the right direction, they can be an amazing asset to the team and we can all grow closer and get faster."