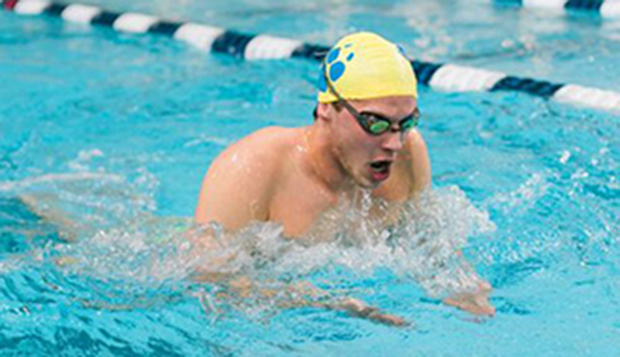 After being left as fish out of water by COVID-19 last spring, three members of Liberty University's inaugural men's swimming recruiting class — senior captain Ben Klipp, graduate Noah Miller, and senior Matt Sonnen — are looking to leave the competition in their wakes as they enter their final season of collegiate competition.

"I can vouch for all of the guys here, they poured their blood, sweat, and tears into the swim season and to have that taken away was really devastating," Klipp said. "Right now, it's all about trying to keep that upward momentum that we had going into the spring last year, trying to do the same thing this year."

"Last year, we trained really hard and there was no payoff at the end, which was really disappointing," Miller added. "So this year, we just want to go out there and really show everybody what we're all about."

Flames third-year Head Coach Heath Grishaw has kept his seniors motivated to maintain their conditioning through the offseason and return with an insatiable desire to pursue their national championship dreams.

"We're coming back with a vengeance," said Grishaw, who noted that he only graduated one swimmer this past spring, Guatemalan pentathlete Charles Fernandez, a qualifier for the 2021 Olympics in Tokyo. "This class is very special because I started with them as the assistant. They really have been anchors, a staple for this program since they helped start it their freshman year. COVID shut us down, but it doesn't mean that it shut down the talent that we have. We're going to come back reloaded and ready to rock."

"Pretty much from Day 1, we count down the days until nationals," added Klipp, who led last week's practices at the Liberty Natatorium. "That's our focus; that's our end goal. Everything we do, we do to get better and to prepare for that specific moment. When the moment comes, we're going to be ready."

"It's kind of like just going out with your friends one last time and just trying to kill it," Miller added.

Klipp, a sport management major who would like to work on a marketing team with the Washington Capitals, Nationals, or Wizards, has developed an especially strong rapport with Miller, who is in his first year in the Liberty School of Law's Juris Doctor program.

"Noah and I are best friends and we're usually in lanes right next to each other, pushing each other and racing each other," Klipp said. "We're just great training partners. Both of us want to be the alpha dog, so the competition that we have is something special. We've been through a lot on this team and it would be cool to win a championship together."

Klipp and Miller help set the pace for a few of the Flames' relays along with sophomore standout Matt Davidson and junior Caleb Rice, another tremendous role model who will graduate a year early with a degree in mathematics.

"Ben is just coming back from a knee surgery so the fact that he is already leading the pack is really good to see from him," Liberty senior and first-year Assistant Coach Blake Dunson said. "He's an extremely well-rounded swimmer. He's kind of our wildcard. It's really about what events we need him to swim."

This summer, Grishaw, who emerged as the Club Sports Assistant Coach of the Year after the program's first season in 2017-18, named Dunson — another member of the first recruiting class — as his assistant who will work on finalizing future recruiting classes.

Dunson stopped competing as a sophomore due to a back injury and started coaching the same Lynchburg YMCA team that Grishaw had worked with before returning to Liberty to start coaching while pursuing his master's degree.

"It's fantastic," Dunson said. "I learned a lot from Heath when I was swimming, so he was the reason I wanted to get into coaching."

"He's going to lead the distance group and I am excited to work with him," Grishaw added. "We've got some very talented guys across all strokes and distances."

Both coaches are eager to give the Flames' graduating class closure at the USA Swimming Collegiate National Championships in Atlanta, where they swam in their first nationals meet in Spring 2018.

"It will be a very full-circle moment, especially considering our national championships are at the same place they were as freshmen, at Georgia Tech," Dunson said. "I got to compete there and now I will get to coach there."

"Lord willing, we do have a nationals this year because I want them to have that opportunity before they leave," Grishaw added. "All I ask is for Liberty and everyone else to be praying that this COVID just disappears and we can get back into the normal swing of things. Sports is a huge part of student life and the way this world is right now, everybody needs something like that, for morale — spiritually and emotionally."