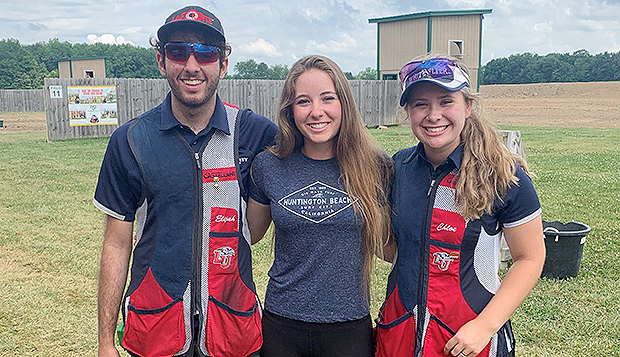 After a months-long lapse from competition due to COVID-19, which canceled the ACUI National Championships in San Antonio, Texas, in March, three members of Liberty University's shotgun team traveled to the Cardinal Center in Marengo, Ohio, in mid-July to compete in the Scholastic Clay Target Program (SCTP) National Championships.

"That was my sixth year in a row shooting nationals there," said Hendrix, who decided two days before the event to take a break from her summer internship in Arizona and fly out to the competition. "Those were all new skeet fields so that was the first time anyone had shot on them. It was still a good experience … to find that competitive edge."

The Cardinal Center is the same location where Liberty competed for the first time in last fall's SCTP Collegiate Nationals, finishing second in Division III.

"It's a really nice facility," said Labrozzi, who shot in the upper-80s for Sporting Clays and in the mid-90s for American Skeet both days. "The (SCTP) national competition is the biggest event of the year and we normally train for that for months. Everybody was out of practice, so everybody was on equal footing. I hadn't shot since I was at Liberty before Spring Break so jumping in and shooting it for fun was a different experience."

Senior Chloe Sterner joined Labrozzi as part of a co-ed team competition, representing their high school in Pennsylvania and the Mason-Dixon Clay Busters.

"It was great to get back into the rhythm of shooting and competing again with my teammates after a long break due to COVID- 19," said Sterner, who shot a personal best round of 93 in American Skeet.

Labrozzi has exceled in Sporting Clays since shooting with former teammate Carl Pongs, a masters-level shooter in that discipline.

"I worked with him extensively in Sporting Clays last year and he definitely helped elevate my game 10-fold from when I got here," Labrozzi said.

Roger Johnson, who replaced Dave Hartman as Head Coach of the shotgun team last fall, will hold tryouts on Tuesday, Sept. 15, from 4-7 p.m. at the Liberty Mountain Gun Club (LMGC), where more than 100 students are expected to vie for 15 roster spots. Shooters must bring their own guns and ammunition to try out in all shotgun disciplines of skeet, trap, sporting clays, and super sporting clays.

"Last year, we had about half that, maybe 40 people try out, so it's cool to see how fast the program is growing and how many people are interested in it," Labrozzi said. "(Coach Johnson) has been fantastic, to come in halfway through the semester like he did and to put all of his faith and confidence in us."

The Flames and Lady Flames are intentional about continuing to create a culture where Christ is first — above the teams' results on the range — and fellowship is fostered.

"This team is definitely a family and everyone's super close on it and we all love each other," Labrozzi said. "We're definitely trying to find people that are good shooters and can be members of our family."

Eight team members who had qualified for the last season's ACUI national competition in San Antonio have already secured their places on this year's team. The remaining spots will not necessarily go to those who shoot the best in tryouts.

"We're more concerned about our faith than our scores," Hendrix said. "We want to make sure they're not only a shooting fit, but also a spiritual fit, that they're relational … and able to pick people up and really motivate them."

This year, all ACUI regular-season and regional events are being conducted virtually through monthly postal competitions. Liberty team members will submit their top five scores in each discipline factored into team scores to be eligible for awarded grants, based on their placement in the Mid-Atlantic and Northeast Regions.

"I've never shot a virtual competition, but one of the bigger skeet shoots last year, the U.S. Open, went on virtually and everything went great," Labrozzi said. "Whether or not ACUI nationals are virtual this year, we're going to train just as hard and have just as much fun."