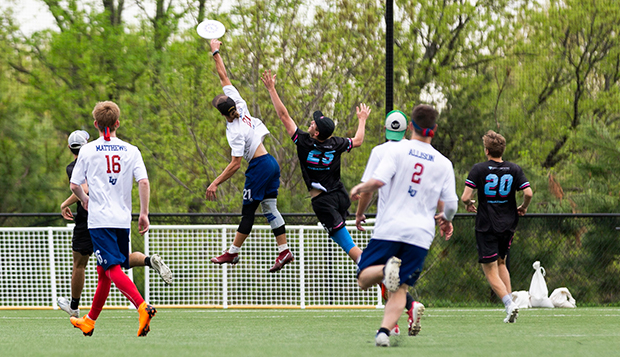 A Liberty player leaps to make a catch in the end zone during a 2019 match at the Liberty Mountain Intramural Complex.

After qualifying for the Atlantic Coast Regional tournament for the first time in program history in 2018-19, Liberty University's men's Ultimate team was denied an opportunity to make a return trip this past spring when COVID-19 cut the season short in mid-March.

"Everybody experienced the COVID thing and had to shut down their seasons early," said Flames Head Coach Kevin Habermas, who took over the team in January of 2019 and is entering his second full season at the helm. "It was really unfortunate, especially for the seniors who have been working hard for four or five years not being able to experience their senior year. You've just got to take what you get and kind of move through it."

Anticipation was at an all-time high last fall, with the team coming off the regional appearance and returning 15 of 16 players from the previous season's roster.

"We had a ton of people at tryouts last fall and it was really exciting to see the program grow," Habermas said.  "It was nice to start fresh and get on the same page, to move up as a team and to see things starting to click. We were able to build on those basics and start going to advanced strategies and it was really exciting coming into Spring of 2020 and revving up for what was going to be another regionals run."

Habermas hopes to rekindle that same energy level and enthusiasm in this year's team, which will hold tryouts in the second week of September. He is blessed to have a number of incoming recruits with Ultimate experience in high school.

"We're losing three guys that graduated, so it will be nice to have all of those guys coming back and be able to move onto advanced stuff and push even further," Habermas said. "A lot of times, you have to teach guys how to throw a frisbee, you've got to teach them how to cut, just normal concepts that someone who has been playing for a few years, they are already a couple of steps ahead. So it will be nice to be able to plug in some of this young talent that we are supposed to be getting here in the fall."