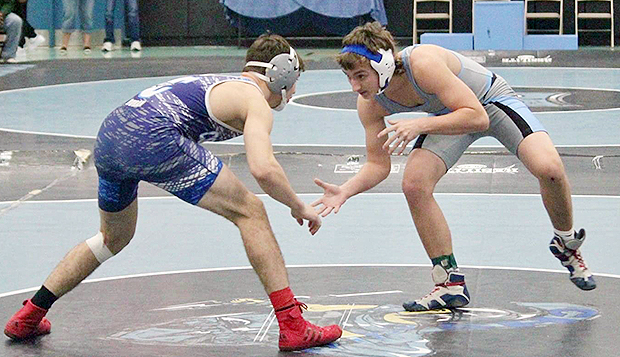 Versatility on the mat is one of Liberty University freshman wrestling recruit Damian Thayer's many strengths.

A three-time Virginia High School League (VHSL) Group 6A state qualifier for Cosby High School in Midlothian, Va., where he completed his career with a 138-41 record, Thayer also finished runner-up at the state level in Greco-Roman wrestling and third in freestyle at summer tournaments in recent years.

Outside of wrestling, Thayer has competed in mixed martial arts (MMA) as well as Judo, Jiu Jitsu, and Muay Thai boxing. He has taken MMA classes three times per week for the past two summers, even after recovering from a series of injuries that sidelined him for half of his senior season at Cosby.

"After wrestling for four years in college, I intend on continuing to train in MMA and hopefully compete in some amateur and possibly professional fights down the road, depending on how successful I am," Thayer said. "As a wrestler, I would say my two biggest strengths are my tenacity or grit and my extensive diversity of moves."

He is excited to face in-house competition in the Flames' wrestling room this fall, to sharpen his skills and strengthen his frame as he prepares to launch his collegiate career in the winter.

"Liberty has an extremely strong group of freshmen lightweights coming in, many of whom I know or wrestled against previously," Thayer said. "I am thrilled to know that I will be among a group of driven young men eager to compete and become better."

Thayer, who wrestled from 113 to 132 pounds at Cosby, will contend for mat time at the 125-133-pound weight classes for the Flames.

Recruited by a few NCAA Division I, II, and III colleges and universities, Thayer chose Liberty because of the spiritual climate and culture he experienced on campus, during Liberty Wrestling Summer Camps in 2018 and 2019 and a College For A Weekend (CFAW) event last fall.

"God is a large part of my life and I don't want to go somewhere where that isn't the case," he said. "The evangelical emphasis and Christian community are very strong at Liberty and the staff and wrestlers truly believe and aren't just putting on a show to fit in. I like the way (the coaches) try to grow us into godly young men. That's a very important and fantastic aspect of the team and college as a whole."

He was also attracted to the amenities Liberty features, including the new Club Sports Training Complex, home to the Flames' and Lady Flames' wrestling teams.

"I really enjoy the beautiful campus and many facilities the university has to offer," Thayer said.

He plans to major in mechanical engineering and minor in business, with the objective of opening his own engineering firm or assisting and eventually running his father's business, Design and Build Plumbing, after graduation.