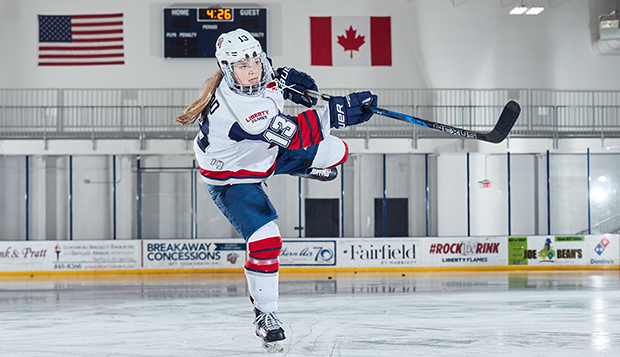 Still technically two-time defending national champions since the 2019-20 tournament was canceled by COVID-19, Liberty University's ACHA Division I women's hockey team will begin its quest for a record-tying third consecutive crown when the Lady Flames open their season at a date to be determined this fall.

After being ranked No. 1 in ACHA Division I for the majority of last season and edging Minot State, 2-1, to win the inaugural Women's Midwest Collegiate Hockey League (WMCHL) tournament, March 8 in St. Louis, Liberty would have been the prohibitive favorite to three-peat at the ACHA National Championships near Dallas in late March.

"It was an awesome season," Lady Flames fourth-year Head Coach Chris Lowes said. "It didn't end the way we wanted, not because of a loss but because of COVID shortening our season. We had great group. We accomplished a lot as a team and I am really proud of what we did."

Now, the Lady Flames must start over again and regain the momentum they would have taken to Texas, even as the start date for the 2020-21 season is still up in the air. The ACHA National Championships in Boston have been postponed three weeks, to April 15-20, to allow teams to schedule and play the required number of regular-season games.

While many players have started skating sessions, Canadian players returning to campus must self-quarantine for two weeks before hitting the ice. Official practices for the Lady Flames will begin the week of Sept. 7-11, with a Media Day at the LaHaye Ice Center scheduled for Sept. 10 from 3-5 p.m.

"We are still waiting on the league to let us know what our fall is going to look like," said Lowes, who said character development is more important to him and his staff than individual stats and on-ice success. "We don't talk about wins and losses. It is about the process of what we want to achieve and who we want to become as a group, off the ice and on the ice, and then the results will follow that."

"As a coaching staff, we are very excited about the group we've got," Lowes said. "It's a really great mix of returning veterans and not just great hockey players but great character ladies, and then we're adding a great group, a diverse group that all bring something different to the table. I think the transition is going to be fairly seamless for us this fall."