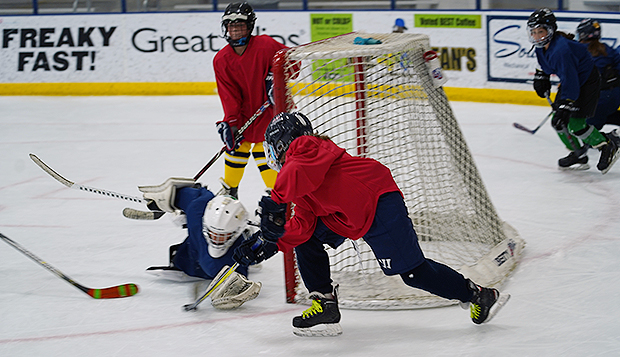 Liberty University Club Sports takes an all-hands-on-deck approach to its summer camps, including Sunday's through Tuesday's girls' hockey session, which brought 15 6-11-year-old players and 16 12-18-year-olds from as far away as Northern Virginia and South Carolina to the LaHaye Ice Center.

"Our whole department gets involved," said Lady Flames ACHA Division I women's hockey Head Coach Chris Lowes, who led the afternoon on-ice sessions along with Assistant Coach Justin Forth, graduate forward Val Manchak, and DIII men's hockey Head Coach Josh Graham. "We've got a few of our women's Division I and Division II players serving as counselors (and clinicians), and others leading chapel. The faith component is big, as are the off-ice activities. (Campers) are working with our strength coaches and athletic trainers."

"It's a good mix of the on-ice, off-ice, chapel, and some fun activities," Lowes said. "The mornings and off-ice have been generally skill work and then in the afternoons, we play more games and have competitions."DII women's Head Coach Rena Leone and DI men's Associate Head Coach Jeff Boettger directed the morning on-ice sessions and Assistant Director of Academic Advancement Donna Holland and Assistant Athletic Director for Sports Medicine Angie Witt rotated in leading chapel services.

He noted that COVID-19 restrictions — which prevented Liberty's DI and DII men's and women's hockey teams from competing in the March 19-29 ACHA National Championships in Frisco, Texas, and shut down many rinks throughout the region — have prevented a business-as-usual approach to this week's camp, with many parents accompanying their kids and staying at area hotels.

"That's why we love the overnight camps, because then they get to stay in the dorms and eat in the cafeteria and get the full camp experience," Lowes said. "This camp is keeping them from going six months without being on the ice before the fall." 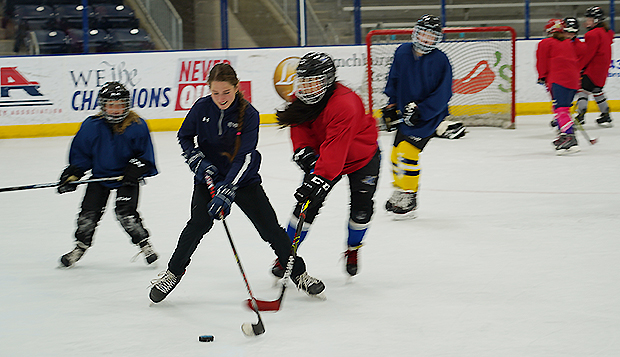