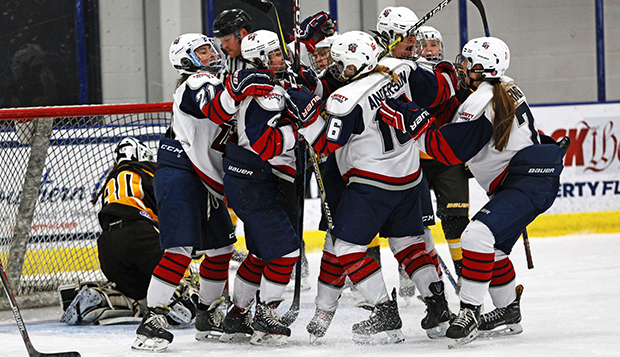 An undisputedly exceptional season for Liberty University's ACHA Division II women's hockey team left a lot to be desired in the offseason.

As one of four of Liberty's five hockey teams (two men's, two women's) to qualify for the March 19-29 ACHA National Championships, the Lady Flames (14-5) had their postseason flights to Frisco, Texas, for their second nationals appearance in three seasons — and second in program history — canceled by COVID-19.

"The season was fantastic," Liberty Head Coach Rena Leone said. "We went undefeated in regular-season play for College Hockey East. I knew we were going to do well, but I didn't think we were going to do that well. The girls came together as a team on the ice and just proved that they deserved to go to nationals."

The way the season ended was even more disappointing than finishing 16-4-1 after winning its first ever College Hockey East (CHE) conference tournament championship in 2018-19 only to miss the nationals cut.

"We went to the championship game in the College Hockey East (CHE) playoffs and lost in triple overtime (to Mercyhurst), so that was kind of a stinger, and then to find out two weeks later that we're not going to nationals" made it that much worse, Leone said. "It would have been four Liberty teams at nationals, and it would have been a fantastic time, but at the end of the day, we want to keep everyone safe and healthy. It stinks, but it's something we can't control, so if we can't control it, why are we going to worry about it? It definitely fuels the fire and gives us more determination to make it back again next year."

The Lady Flames featured their first player to eclipse the 100-point scoring mark for her career, rising senior forward Brittany Hegele, and made the most out of their limited resources.

"For a small bench — we had 13 players, so 12 skaters and a goalie — we were able to do so much," Leone said. "A lot of passion and dedication was put into this season, (and) it was a team effort. All the girls were uplifting each other. If somebody was injured, they were on the bench making sure that they were pushing and motivating the girls, knowing that they were there to support them mentally. Throughout the season, the bond that they have is unreal. I've never seen a team stick together, not even in a team sense, but more just as friends. They were there to be with each other and to rely on each other, which shows both on and off the ice and just gives a great team dynamic."