Through adversity, Flames learn that life is more than a game 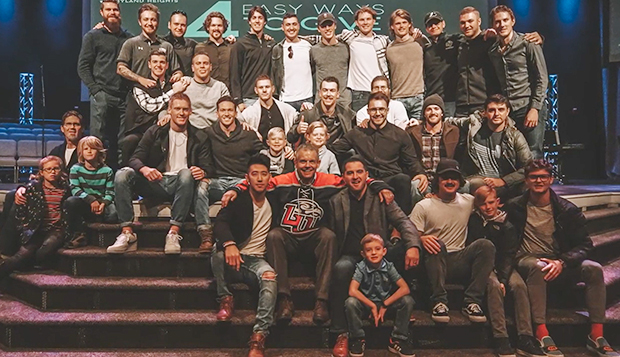 "Success is less about the outcomes and more about our commitment to the journey and who we become along the way." - Kevin DeShazo

That is the attitude and positive outlook Liberty University ACHA Division I men's hockey Head Coach Kirk Handy has taken in dealing with the unexpected end to the Flames' postseason.

After winning its third ESCHL Tournament championship in four years, and before making a return trip to Frisco, Texas, to challenge for the ACHA DI National Championship from March 19-24, Liberty (33-4, ranked second in ACHA DI) found out on March 12 that tournament was canceled due to COVID-19.

The majority of the Flames' players have now returned home after classes were moved online following the March 16-20 Spring Break.

"We were disappointed that we weren't able to complete the mission of winning the national championship," Handy said. "But our mission was accomplished as we raised the standards for our student-athletes and continued to develop our players at a deeper level on and off the ice."

He mentioned the team's performance in the classroom, where the Flames elevated their cumulative GPA by nearly 0.75 from 2016 to over 3.5 this past semester, as an example of the student-athletes' holistic growth. He pointed to the Jan. 2-10 mission trip to Finland as a unifying experience that took them out of their spiritual comfort zones and has helped them to put this crisis in perspective.

"Aside from the way our guys battled on the ice, the way they built a solid foundation and continued to grow in their faith was encouraging to see," Handy said. "After we talked through all the disappointment (over the season being cut short), the players and coaches shared the gratitude of being a part of something special like this. We all knew we had a special team this year."

Club Sports Ministry Director Brian Davidson said the Flames matured spiritually through shared experiences — in the LaHaye Ice Center, on hockey road trips, and especially on the journey to Finland to start the New Year.

"All of those experiences have led them to love God more," Davidson said. "Probably the most impactful testimony we heard was that of (former Finnish professional hockey player Miko Malkanaki) who came to Christ as a result of a career-ending injury. He played at a high level and now has a chance to reflect on hockey and life. Hopefully the guys will take time to reflect, too, to go through different emotions of disappointment and anger, but know if they keep moving positively forward, they can use that to find perspective."

The premature end to the season was part of the refining process the Flames endured this season, including dealing with a rash of injuries and other setbacks. Liberty head captain Devin Pierce hung up his skates at the end of the fall semester after a series of concussions and fellow senior forward and alternate captain Brock Thompson suffered a season-ending injury in late January.

"That was a major reason why were able to accomplish what we were able to this season, because of the guys and the relationships that they had," he said. "Now we have an opportunity to continue to build on the legacy of our hockey program and continue to have a culture that's really special."

Davidson said for the seniors the greatest prize in their four-year journey was not in achieving their ultimate goal of winning a national championship. True success is found in answering two questions.

"No. 1: ‘Did they love God more than when they first came here and did that love grow deeper?'" Davidson asked. "And No. 2: ‘Did they learn how to love others more?' Those are the two greatest commandments of Jesus."

He noted that the trip to Finland showed the Flames how to use hockey as a platform to communicate the love of Christ, to make friendships so that they could share the Gospel. Further goals include developing their personal relationships with the Lord and living as He did, exemplifying servant leadership.

A handful of players made first-time commitments to follow Christ, decisions that will lead to eternal rewards. Blomberg was baptized last season and sophomore forwards Matt Bartel and Josh Fricks and freshman defenseman Dmytro Kobylyanskyi were baptized this past fall.

During the last chapel service Davidson had a chance to lead the Flames in on March 10, he talked about trusting the process in their development as players and Champions for Christ.

"That is almost a coaching cliché by now, but the implications are No. 1: you have to have faith in the ones leading the process — faith in the coach and, from a spiritual standpoint, faith in our Heavenly Father," Davidson said. "No. 2: that the process can be hard. It's sacrificial, there are unknowns, we make commitments and some days we won't do our best, but we have to press on."

Davidson is going through a personal testing of his faith as he prays for the healing of Zechariah Puig, the 6-year-old son of his daughter, Danielle ('08) and son-in-law Jonathan Puig ('07). He endured his first round of chemotherapy this week in his battle against acute myeloid leukemia. (The family has set up a Facebook page, "Pray for Zeke," with updates.)

"God has brought me to the place where I have faith in Him and I have to trust the process, regardless of what the results are," Davidson said, offering Romans 12:12 as encouragement. "Paul says we are to rejoice in hope, be patient in tribulation as we walk through trials, and pray continually. That's the spiritual process. Enemies to faith and trust are doubt and fear, which undermine our faith in the process."

Davidson, who is in quarantine due to respiratory issues, plans to send out personalized letters of encouragement to the team members and be available for them to call or text, to help them process the shock of the end of the season and look to the future with hope.

"I think God's going to use this in their lives to help others that go through life-altering changes abruptly," Davidson said. "I think it's going to help them, not only those who go on to coach, but in all of their lives. God's going to redeem that, to learn how to love others better." 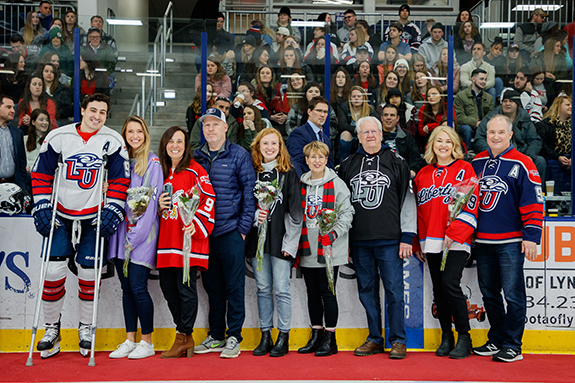 Brock Thompson is accompanied by family and friends on Senior Night. (Photo by Ellie Richardson)