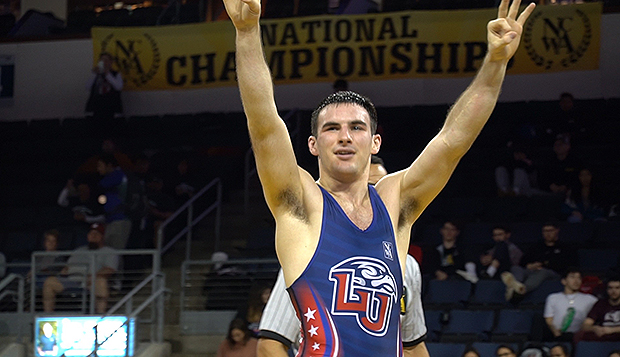 Former U.S. Olympic men's wrestling gold medalist and coach Dan Gable is famous for saying, "Once you've wrestled, everything else in life is easy."

"It has proven to be true, as wrestling has helped me get through everything else in life — school and work and other mental challenges I've had to overcome," Amos said.

One of the biggest emotional trials he has endured is the loss of his father, Jeff Amos, who died of cancer last summer after battling pneumonia and surviving a series of heart attacks over the previous four years.

"He was always very proud of my wrestling and saw me win my last two titles by watching the (FloWrestling) livestream," Amos said. "He wasn't there for this one, but he was there in spirit."

Before winning his second national title last March in Texas, he received a texted "pep talk" from his father, who knew it would be the last match he would witness his son wrestle.

"I read that text again this year and it was something that calmed me and got me laser-focused and made me compete for something more than myself," Amos said. "It was nice knowing he was with me and he was looking out for me, having that angel on my shoulder."

Jeff Amos had given his son encouraging talks before games ever since he played T-ball, and throughout his baseball, football, and wrestling career at Cave Spring High School in Roanoke, Va.

"He was the one who got me into sports when I was 5 years old and he was always there, whatever sport I competed in. He was very inspirational," Amos said, noting that his decision to wrestle for the Flames inspired his dad to draw closer to Christ. "He always was a Christian, but he started developing his faith toward the end of his life, which gives me comfort. He loved Liberty, Jerry Falwell, and what Liberty represents, and when he found out I was coming here, he was a very big fan of it."

Amos credits Head Coach Jesse Castro for bringing out his best on and off the mat throughout his collegiate career.

"Coach Castro was definitely a father figure and he really looked out for me in a bunch of different ways," Amos said. "He was a really good spiritual leader for the team."

He guided the Flames to their third consecutive team trophies at both the NCWA National Duals, Jan. 24-25 at the LaHaye Ice Center, which they won for the fifth time in nine years, and the NCWA Grand National Championships in Texas, which they captured for the fourth time in six seasons.

Amos played a critical role in securing Liberty's second NCWA Grand National title in 2018, winning his first individual crown in the 235-pound final with a last-second reversal, propelling the Flames past Mid-Atlantic Conference rival Apprentice School by half a point in the final team standings.

Saturday's third consecutive national title, for both the team and Amos individually, was less dramatic, but every bit as memorable. After scoring an 8-0 major decision over fellow four-time All-American Kyler Slade from Ohio State in a semifinal rematch of their 2019 national quarterfinal duel, Amos overcame a 4-2 deficit with his third escape and tied the match by drawing a stalling penalty on the Buckeyes' Eldar Muradov. Amos scored his only takedown early in the overtime period for a 6-4 triumph, avenging an 11-7 setback in the final of the Feb. 2, 2019, Messiah (Pa.) Open.

"That was an unbelievable match, in my opinion the most exciting match of the tournament," Castro said. "Amos is probably one of the smarter wresters I've ever coached in 35 years of wrestling. (Muradov), who is from Turkey, was more technical and more athletic, but Austin just outsmarted him. It was a very, very tactical match."

Amos' skills on the mat were sharpened by all of the Flames' upperweights throughout the season.

"We have a very tough room," Amos said. "We had a finalist at every weight class from 157 pounds (Chad Cantrell to fellow junior national champion Joe Scott at 165 pounds to senior 174-pound runner-up Cody Richmond) all the way up to heavyweight (freshman runner-up Rick Weaver), so it was nice having good practice partners and guys who can push you in the room."

"It was nice having two national champions right beside you in weight because I knew they would push me," Amos said. "Jeff, being 30 pounds bigger than me, had the strength and size on me, and Sam, being 20 pounds lighter than me, was really quick and high-paced. He doesn't give you a break and is always up in your face. That's what makes him a good captain."

Amos ended his season with a 36-4 record and completed his collegiate career with a mark of 118-17, far better than his 92-42 record in high school.

"It's been a really crazy career, a lot of highs and a lot of lows and ultimately, I wouldn't change a thing," he said. "It is kind of sad that it's over, but also exciting to see the next new path in my life."

After graduating with a degree in accounting in December, Amos took two final classes this spring to stay eligible to compete on the team. After starting as an intern last summer, he has worked fulltime as the accountant for the Lynchburg Hillcats' minor league baseball team, a Class A affiliate of the Cleveland Indians, ever since. He plans to pursue his CPA online through the state of Virginia.

"Wrestling definitely did help me get ahead in the accounting field by teaching me that there's always something that's going to be harder," Amos said. "It helped me with my mental toughness in performing under pressure." 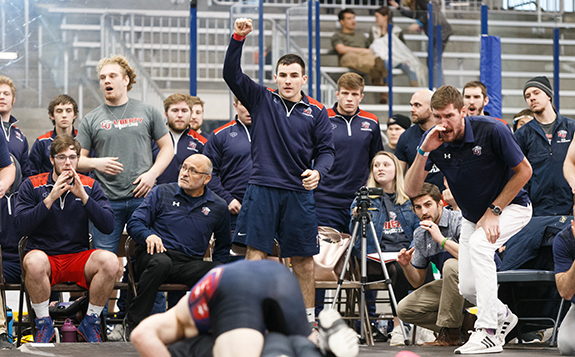