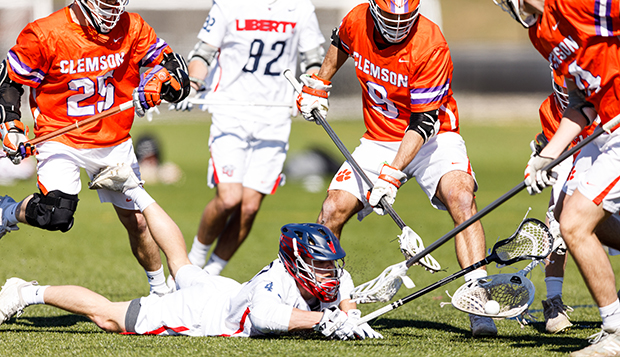 Senior middies Carter Elliott and C.J. Nichols combined for 10 goals to catapult Liberty University's fourth-ranked men's lacrosse team to a 14-8 victory over No. 19 Clemson on Saturday afternoon at the Liberty Lacrosse Fields. It was the same score the Flames beat the Tigers by early last season in a battle between the No. 6 and No. 17 teams in MCLA Division I.

"I love to shoot from up top, Carter (Elliott) loves to shoot up top," Nichols said. "We're a great team at stretching the defense, so we try to mix it up and hit from the outside to open up the inside and play off whatever they give us."

"When that combination starts hitting, that's hard for anybody to be able to cover," Liberty Head Coach Kyle McQuillan added.

"So far, it was probably the most complete game we've played," McQuillan said. "It's only our sixth game of the year, so hopefully, we'll be able to build off of this momentum, but overall it was a good game on both sides of the ball."

Nichols (four goals) sparked the scoring for the Flames (6-0) with 12:14 left in the first quarter by unleashing a shot from the left side after Liberty cycled passes around the net. Clemson's Will Werner netted the equalizer on a quick restart after forcing a turnover, despite falling down on his shot from the top of the right side of the box at the 10:04 mark.

Elliott (six goals) lifted Liberty to a 2-1 lead when he scored unassisted by ripping a turnaround shot from the left side of the box into the upper netting at the 7:04 mark.

Then, 3:31 before the end of the first quarter, senior middie Austin Aguilar bounced a shot from the top of the box that got past Clemson goalie Jacob Lotz before Elliott scored from the same spot by launching a missile into the upper netting, stretching Liberty's lead to 4-1 with 36.6 seconds to go.

The Tigers trimmed the deficit to 4-1 with 12:49 left in the second quarter when attack Devon McIntyre dodged a defender and bounced a shot in after dashing into the right crease.

But Elliott answered with a running shot from the top of the box on transition, extending Liberty's lead to 5-2 at the 11:43 mark.

Freshman attack Jackson Miller found Caleb Britton cutting into the left crease for a point-blank finish into the top left corner of the cage for a 6-2 advantage 11:27 before halftime.

"Caleb and Jackson are our consistent mainstays of the attack," McQuillan said. "They do a good job of both controlling the game and controlling the clock and creating some offense and setting guys up, feeding from down low."

"Caleb's a great facilitator, a great finisher," Nichols added. "We have a great offense with (Jackson) Miller helping us out. He really instilled patience in us today."

Clemson's Garret Brennan came out from behind the left side of the cage and unleashed a sharp-angled shot into the upper netting, cutting the gap to 6-3 at the 10:24 mark.

Freshman attack Ryan O'Connor maneuvered around a defender at the top of the box and fired a sidearmed shot into the lower netting, expanding the Flames' lead to 8-3 with 3:43 left in the half.

Elliott received a pass from Britton and capped the first-half scoring by threading a shot through traffic in the left side of the box for a 9-3 lead.

McIntyre received a cross-crease feed from Brennan and put it away past Reynolds from point-blank range at the 13:54 mark of the third quarter, making it a 9-4 contest.

Nichols sandwiched two more goals — his third and fourth of the day inside the left and right pipes, respectively — around a tally by the Tigers, extending Liberty's lead to 11-5.

The Tigers' Will Marrapodi emerged from behind the right post and deposited a backhanded shot into the upper netting, trimming the deficit to 11-6, but Reynolds preserved the five-goal cushion by making spectacular back-to-back saves of a behind-the-back shot by Chase Rivera and putback by Marrapodi at the 5:25 mark.

"Ryan's great," McQuillan said. "As good as our defense played today, Ryan really was the glue that was holding us together because on those few instances where our slides were late or we were getting beat, Ryan definitely saved our butts a couple times and did a great job. He played really, really well."

Junior attack Thomas Pinel set up Elliott for a rocket of a shot from the top of the box into the top-left corner of the cage with 2:05 left in the third, extending the Flames edge to 12-6 going into the fourth quarter.

Clemson got one goal back when Rivera fired a short-ranged submarine shot from the right side into the top-left corner of the net with 10:40 remaining in regulation before Elliott netted his sixth goal of the game, waltzing into the left side of the box before stepping back and uncorking a shot that beat replacement goalie Lad Howell beneath the crossbar for a 13-7 margin.

Then, with 5:35 to go, Miller spotted sophomore middie Cameron Carter cutting into the top of the box where he finished with authority, doubling the advantage to 14-7. Rivera capped the scoring at the 3:34 mark with a top-shelf finish after penetrating deep into the right crease.

The Flames have eight days to prepare for an extremely challenging Spring Break road trip that will include three games in six days — at No. 7 Florida State on March 16, No. 22 Florida on March 18, and No. 1 defending national champion South Carolina on March 21.

"Three games against three SELC opponents, all ranked, so we're looking forward to it and it's going to be a good test," McQuillan said. "It's a good bonding time and hopefully guys will continue to develop and take steps in a positive direction. From here on out, it's nothing but ranked teams, so we've got to bring our game every day."