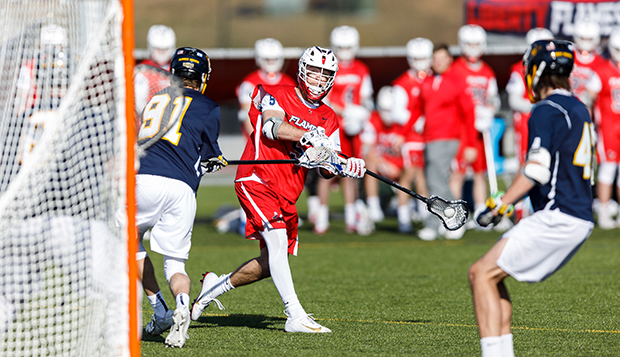 Senior midfielder Austin Aguilar keeps an eye on the goal as he fires a shot against West Virginia. (Photos by Chase Gyles)

Two weeks before the Ides of March, Liberty University's men's lacrosse team, ranked fifth in MCLA Division I at 5-0, clinched a berth into the April 24-26 SELC Division I Tournament near Atlanta with a 15-10 triumph over third-place Northwest Region rival West Virginia on Sunday afternoon at the Liberty Lacrosse Fields.

"It's probably the earliest we've ever locked up (an SELC) playoff spot, so it will obviously come down to that Virginia Tech game to determine who's the No. 1 and 2 seed," Flames Head Coach Kyle McQuillan said of the April 17 regular-season-ending showdown with the Hokies at the Liberty Lacrosse Fields.

Senior middie Derrick Esh started the scoring by depositing a low shot from short range past WVU goalie Aaron Adams before sophomore midfielder Cameron Carter netted a second goal from the top of the left side of the box at the 11:05 mark.

Senior midfielder Carter Elliott stutter-stepped on his approach to the top of the box before making a move around a defender and unleashing a low shot inside the right post to lift Liberty to a 3-0 lead with 8:36 to go in the first.

Senior defender Charlie Shier and Carter assisted junior attack Thomas Pinel, who rifled a left-handed sidearm shot from top of the box into the upper netting, extending Liberty's lead to 4-0 and prompting the Mountaineers to call time out with 5:42 left in the first quarter.

Midfielder Corben Reed got WVU (3-5) on the scoreboard less than a minute later, firing a running shot past Flames goalie Ryan Reynolds from the left side of the box to make it a 4-1 contest with 4:44 left in the first.

Shier sparked the Flames' transition game when he picked up a loose ball and cleared it with a charge up the middle of the field before dishing it to freshman attack Jackson Miller who spotted senior attack Caleb Britton for a turnaround shot from the left side into the back of the net, stretching it to 5-1 with 42 seconds left in the quarter.

The Miller to Britton connection struck again to start the second-quarter scoring at the 9:46 mark when Britton sniped his shot into the top right corner of the cage before Reed set up fellow Mountaineers middie Antonio Mascaro, who ripped a shot from the top of the box to trim Liberty's lead to 6-2 at the 8:18 mark.

Then, 1:40 before halftime, senior middie C.J. Nichols assisted Esh, who darted into the left side of the box and unloaded a shot that beat Adams inside the right post for a 7-2 advantage.

The second half featured back and forth momentum changes.

Less than a minute into the second half, Jerett Gaeger converted a wraparound score from behind the left side of the net, trimming the deficit to 7-3, before Miller answered for Liberty with a howitzer from the perimeter at the 11:36 mark.

Reed responded for WVU, cutting the gap to 8-4, before Nichols received a pass from Miller and unloaded a bounce shot from the top of the box that skipped past Adams at the 9:08 mark. Matt Meyers took an entry pass from Sam Kozak and finished in the right crease before the Flames netted four consecutive goals on shots from the top of the box by Elliott, Esh, and Carter, who assisted senior middie Austin Aguilar's shot in the right side of the box to give Liberty some separation, leading 13-5 with 2:39 remaining in the third quarter.

Jake Klein finally stopped the bleeding for the Mountaineers, finishing tic-tac-toe passing with a point-blank finish of a Meyers assist in the right crease at the 1:16 mark.

WVU trailed 13-6 going into the fourth quarter, but quickly cut it to 13-8 with fast-break finishes by Connor Buhrow and Jake Klein off a short feed from Reed.

Aguilar and Nichols hit posts with their perimeter shots before finding the net five minutes apart, Nichols' off an assist from Esh with 2:58 remaining in regulation. But the Mountaineers showed they still had some fight left in them as Christian Casto and Buhrow scored back-to-back goals in a span of 21 seconds to pull WVU back within five goals.

"We weren't doing a good enough job of maintaining that momentum," McQuillan said. "It got away from us there in the fourth … (Fast-break scores) sparks so much momentum and shifts it really quickly. A lot of credit to West Virginia to never say die. They stuck with it and continued to push until the game was over."

The Flames conclude their five-game homestand next Saturday at 2 p.m. against No. 20 Clemson (4-2) back at the Liberty Lacrosse Fields.

"From here on out, every team that we've got is a top-25 team, so we've got to be better than we were today and be more consistent," McQuillan said. "Clemson is definitely a playoff team, maybe even a national tournament team … (and) we're going to get their best punch. They're a team, like West Virginia, that year after year has gotten better and better."

That is true for the Flames as well, who are coming off their first undefeated season and are shooting for their third consecutive MCLA Division I National Championships bid, May 4-9 in Salt Lake City. 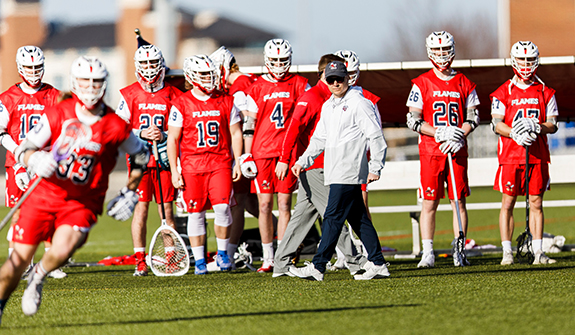 Liberty Head Coach Kyle McQuillan stalks the sidelines as the Flames look to spark a transition.