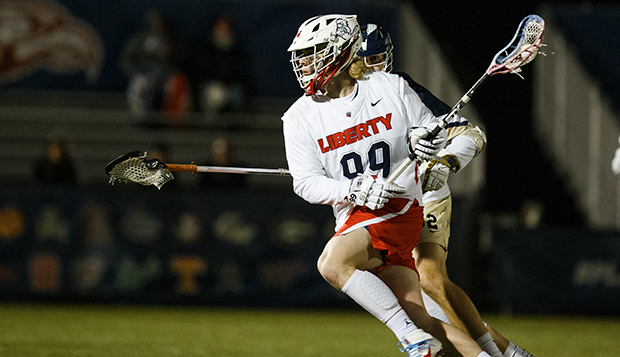 Temperatures hovering above freezing at game time didn't keep Liberty University's men's lacrosse team from lighting up the scoreboard — and the flamethrowers behind it used to celebrate Flames' goals — early and often against SELC Northwest Region opponent George Washington, keeping players and fans on hand warm for Friday night's contest at the Liberty Lacrosse Fields.

Just 45 seconds after the opening faceoff, senior attack Caleb Britton started the scoring off an assist from junior attack Jackson Miller for a 1-0 advantage.

Senior midfielder Derrick Esh ended a scoring drought of nearly eight minutes by firing a running shot from the center of the box at the 6:47 mark before Miller set up junior attack Thomas Pinel as he cut into the left crease for a short-range finish less than a minute later, extending Liberty's lead to 3-0.

Then, 8:30 before halftime, Rude fed a pass into Britton for a turn-around finish and an 8-0 advantage.

Cameron Carter fed fellow sophomore midfielder Ryan O'Connor from the left side for a point-blank finish to extend the lead to 9-0 before Britton then took a pass from Elliott and completed his hat trick, pushing Liberty's commanding edge to 10-0 at the 2:38 mark. Aguilar stutter-stepped into the top of the right side of the box and rocketed his second goal of the game to make it 11-0 at the half.

"The idea of a shutout in lacrosse is definitely tough to do with how open the game is and making all of the substitutions we were making and getting all of our guys in," McQuillan said. "Our big emphasis tonight was making sure we didn't allow goals on transition … or in the first 30 seconds of a possession, and we were able to do that."

After nearly a 10-minute scoreless stretch, Aguilar capped his hat trick by beating the 80-second shot clock by dashing into the box and fighting off a check before beating three Colonials defenders with a top-shelf finish at the 4:15 mark of the third quarter.

"There were some lulls for sure (but) that's three games this season where we scored exactly 18 goals, so offensively, we're definitely happy with the production," McQuillan said. "We were really patient tonight and realized pretty early that we had a handle on things."

Freshman attack Mark Rolewicz padded Liberty's lead to 13-1 by firing a turnaround shot from the left side with 2:59 left before Pinel added a punctuation mark to the third-quarter scoring after penetrating deep into the right crease for a 14-1 advantage.

Rude capitalized on a man-up opportunity to extend the edge to 15-1 at the 10:05 mark of the fourth quarter by unleashing a missile from the top of the box into the top-right corner of the cage. The Flames scored again with a two-man advantage at the 9:24 mark when freshman attack Nathaniel Spears ripped a shot from the left side off an assist from senior attack Eli Britton.

"It was nice to be able to get to our second- and third-line middies and just get everybody some good minutes tonight," McQuillan said. "It's always nice to reward those guys, not only with minutes, but when they are able to come out and have some success and get some goals, it's a good confidence-booster."

Rude became the Flames' third player to net a hat trick by rifling another shot from the top of the box into the upper netting, lifting Liberty to a 17-1 lead. After O'Connor intercepted a GW pass, Eli Britton cashed in from point-blank range with an easy finish for an 18-1 advantage with 5:14 to go.

The Flames return to action against another SELC Northwest Region rival, West Virginia, on Sunday at 2 p.m. back at the Liberty Lacrosse Fields. The Mountaineers were leading Virginia Tech in the last two minutes of their game last weekend before falling 13-10."

"We're expecting some good competition from West Virginia," McQuillan said. "They're a team that has progressively been getting better every year, so we're going to be prepared for Sunday." 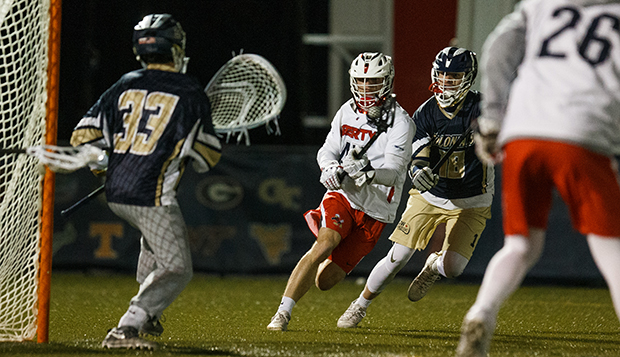 Junior attack Thomas Pinel cuts into the crease for one of his two goals on the night against GW.