Flames finish as swimmers-up to Virginia at UVA, JMU meets 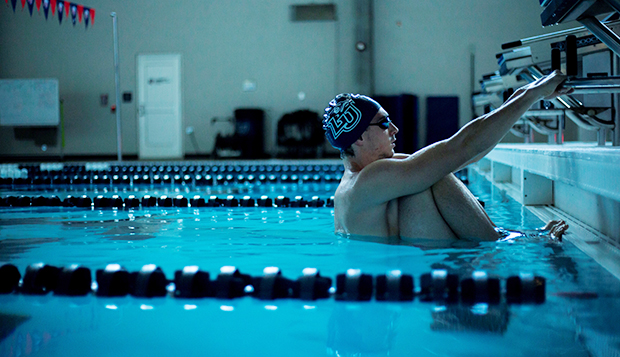 "We were really pleased with this weekend," Flames Head Coach Heath Grishaw said. "JMU has a great club team so it was really fun to get to swim against them. JMU has an older style of pool, so it was a challenge to learn to swim with that wake. It wasn't as great of a weekend for us as it was for UVA, but it served as a good wakeup call for our guys to know (the Collegiate Club Swimming National Championships) will be here soon (April 10-12 in Greensboro, N.C.) and we're not ready for that yet."

Previously, the Flames were also swimmers-up to the Cavaliers, who amassed 328 points in the combined men's and women's team standings, at UVA's Wet Wahoo Invitational on Feb. 1. Liberty's men totaled 57 points at that meet, followed by UNC Chapel Hill (41) and with JMU, Virginia Tech, and Duke landing in a three-way tie for fourth place with 26 points.

Monroe and freshman Wade Lawrence both achieved national qualifying times in the 50 back.

Grishaw said the Flames may host a last-chance intra-squad meet at the Liberty Natatorium in early March to earn a few more qualifying cuts for nationals. He is looking forward to sending 20 swimmers to Greensboro, twice as many as last season, when the Flames placed 29th out of 120 teams at Ohio State.

"The Greensboro Aquatic Center is going to be a great facility to swim in for a national championship," Grishaw said. "That is a giant, fast pool. I'm excited about it. It'll be a great event."

He plans to maintain the rigorous practice schedule of eight to nine sessions per week, including weight training, before tapering the swimmers for nationals in early April.

"The foundation of this program is extremely strong and I am super pleased with what we've seen," Grishaw said. "Guys have responded really well, developing friendships and brotherhood. Watching the family come together, guys cheering for each other every race and practice, I look forward to it every afternoon."