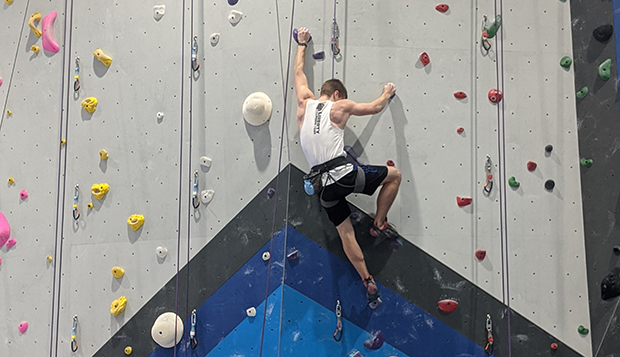 "They did a great job setting the problems for the competition, both in bouldering and route climbing, and we did very well and really enjoyed ourselves," Head Coach Elliot Gaunt said. "The guys swept the podium for Sport climbing and Gwyneth (Mars) took second in women's Sport climbing, so it was a great day."

USA Climbing recently expanded the Capital Region that the Flames and Lady Flames compete in to include southern Pennsylvania, but most of the teams they climbed against — Cornell, Pittsburgh, and a few smaller colleges — were from the Northeast Region, with Navy the only Capital Region rival.

Liberty accounted for 11 of the 40 student-athletes in the competition, led by Joseph Liederbach, who finished first in the 11-man Sport division with 5,700 points. Fellow senior Jonathan Anderson won a tiebreaker for second place with 5,100 points, edging junior teammate Steven Cornford (third, 5,100), who needed more attempts to scale as high as Anderson. Lazarus Frejosky, a sophomore from Lynchburg, Va., finished fifth with 4,600 points.

Mars was runner-up in the women's Sport division with 5,100 points, followed by Kirstin Eitreim, a junior from Minnetonka, Minn., who placed eighth out of 14 competitors with 3,900 points and junior Jenna Mullen (11th, 2,600 points).

The Flames' and Lady Flames' two climbers who entered in bouldering competitions both placed 11th in fields of 15 and 17, respectively, senior Avery King with 9,300 points and freshman Hadleigh Murphy with 8,200.

"The team is doing really well," Gaunt said. "We changed the format for how we've structured our training this season which has created good team moral and camaraderie. Warmer weather this winter has allowed climbers to get outside and climb more, challenging themselves, which has been good for the team."

Liberty will compete on Feb. 29 at Crimper's Climbing in Christiansburg, where it expects to meet Capital Region climbers from host Virginia Tech, Virginia, and possibly William & Mary in its last regular-season event. Gaunt plans to send a travel team of 14 climbers to the second Capital Region Championships, at a date and location to be determined. That competition will serve as a qualifier for the April 17-19 USA Climbing Collegiate National Championships in Denver for the top seven climbers in all disciplines.