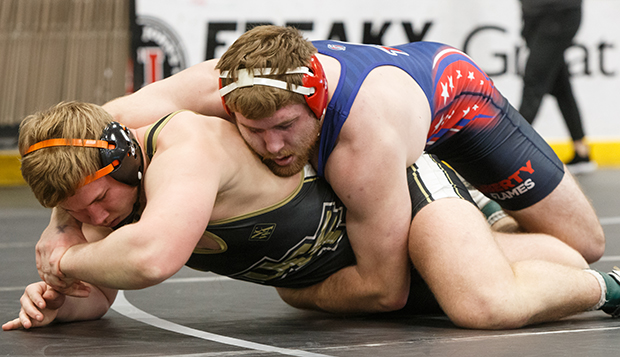 Liberty University's men's wrestling team overwhelmed The Apprentice School 43-13 on Saturday night at the LaHaye Ice Center to win its third consecutive NCWA National Duals championship and fifth in the nine years the Flames have competed at that level.

"Dominance," Liberty Head Coach Jesse Castro said. "That's what the goal was coming in, to establish a dominant performance. We wanted to get momentum early and the team did that. We had to make some adjustments as we went along in the tournament but I think it culminated in the final round for the championship."

The Flames battled through adversity and displayed resilience in the process. Freshman Wallace Canada maintained positivity despite falling in multiple matches while 149-pound senior teammate Michael Gowen, who is said to have potential to become an all-American, was praised by teammates for his excellent performance.

"He really comes through for us," junior 235-pounder Jeffrey Allen said. "He's the best wrestler at his weight."

Allen, who was one of the Flames' five individual NCWA Grand National champions last year, won the second to last match of the night in impressive fashion.

"We're the team to beat and a lot of coaches coach around what we do," Allen said.

With wrestlers such as Allen planning to return for two more seasons, the pump is primed for the Flames to continue their reign of wrestling dominance. A part of expanding that vision was for the Lady Flames' wrestling team to take its competition to the next level.

On Saturday evening, while the Flames' men competed for their fifth championship trophy, the Lady Flames advanced to the final against Schreiner University in the first-ever NCWA Women's National Duals tournament. Despite not coming away with the victory, Liberty was proud of its hard fought performance.

"We're very team oriented," senior Marissa Sanders said. "We did our best and that's all you can ask for. We fought with everything that we had and at the end of the day, it's all about glorifying God."

Sanders believes that the weekend tournament was about more than just competing; it was about bonding as a team and supporting the men's team in their endeavors as well.

"The bonding that happens in between matches because of the family that we are is pretty cool," she said.

This weekend served as yet another reminder that Liberty's wrestlers are legitimate contenders on the national stage.

The Flames will have two weeks to celebrate their fifth NCWA National Duals championship before returning to where the season started, in Grantham, Pa., to compete at the Feb. 8 Messiah Open.