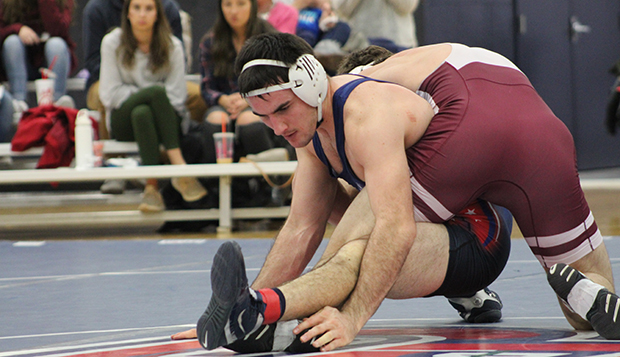 Amos, a two-time defending NCWA Grand National champion — at 235 pounds in 2018 and 197 last season — reached the century mark with a forfeit win in the Flames' 41-15 rout of West Virginia Tech before scoring a 16-0 technical fall over Matthew Speelman to cap off a 43-9 victory over SVU.

"It was a very cool experience and a big blessing to finally go over the 100-win mark because I never got it in high school," said Amos, who won 92 matches at Cave Spring in Roanoke, Va.

The Flames improved to 8-2 in dual matches this season as they gear up to host next weekend's NCWA National Duals, which they will attempt to win for a record third consecutive time and fifth overall, Friday and Saturday at the LaHaye Ice Center.

"I'm excited for arguably our second-biggest tournament of the year," Amos said. "We'll try to peak for that and stay on top of our game, but ultimately, the big thing's Grand Nationals (in Texas in March)."

"We're getting there, but I still think we've got a ways to go," he said. "We're not where we need to be yet. I feel like we can make more adjustments technically. We're going back and working harder for next weekend. I'm confident our guys will rise to the occasion. They like competing for their home crowd."

"Considering giving up two weight classes down low, that's a good performance on our part," Castro said, noting he hopes to have Tristan Walls (125) and Bobby Leek (133) available for next weekend's event. "We're strong from 157 up, but we're definitely going to need some momentum from down low."