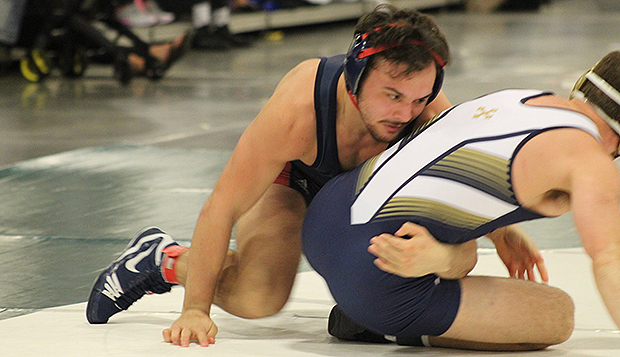 Liberty University's men's wrestling team erased a 14-3 deficit to upend Averett University, an NCAA Division III program, 25-14 in the quarterfinal round of the 40th annual Virginia Duals' American Division on Friday morning at the Hampton Coliseum.

"It was kind of like déjà vu all over again, giving up so many points in the lightweights and putting so much pressure on our upperweights," Flames Head Coach Jesse Castro said.

The win sets up Saturday's 2 p.m. semifinal match against Kutztown (Pa.) University, an NCAA Division II program and the tournament's defending champion. Kutztown defeated The Apprentice School, the only other NCWA program besides the Flames in the tournament, in its quarterfinal match.

Liberty trailed the Cougars by 11 points following the 149-pound match before winning its final six bouts. The Flames clinched the victory when 197-pound senior Austin Amos pinned Kowan Lee in 54 seconds for the only fall recorded by either team.

"There were some really close matches," Castro said. "It was a good match, kudos to their coach, who had his team well prepared for us."

Liberty fell behind 11-0 after Samuel Braswell, an NCAA DIII national qualifier last season, scored a 25-8 technical fall over freshman Tristan Walls at 125 pounds and the Flames forfeited the 133-pound weight class. After sophomore Charlie Hudson scored an 8-5 decision over Joseph Jones at 141 to get Liberty on the scoreboard, Averett bumped Brandon Woody — who is ranked fifth in NCAA DIII at 141 — to 149, where he extended the Cougars' lead to 14-3 with an 11-6 decision over senior Michael Gowen.

After Flames junior Chad Cantrell came from behind to beat Tony Blackman, 10-5 at 157, and senior Cody Richmond defeated Noah Wienclawski, 8-1 at 165, Liberty pulled ahead, 16-14, on senior Sam Karel's 6-0 decision over George Mosely.