Rock climbers learn the ropes at first comp in Christiansburg 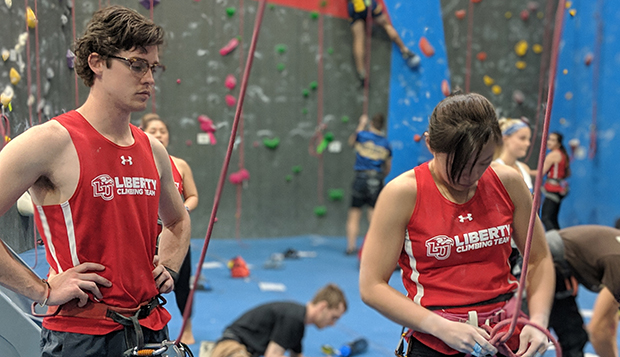 "Everybody did really well competing against at least 80 other athletes, mainly from Virginia Tech and Virginia," Liberty Head Coach Elliot Gaunt said, noting that a citizen's category was included. "Some of our stronger climbers didn't place as well, in their first collegiate competition."

The climbers' top five problems that they completed over a three-hour period counted toward their overall scores. Only the top four overall men's and women's qualifiers went on to compete in the Advanced finals.

Gaunt said this year's roster is about a 50-50 mix of returning climbers and newcomers, with twice as many men (15) as women (seven).

"It has been a major rebuilding year, but there has been really good competition within the team," he said. "We have really good depth, with no outliers who are super strong climbers, making the selection for the travel team more difficult."

This Saturday from 9 a.m. to noon, Liberty will compete in its second USA Climbing-sanctioned event, the Bloc Party 2019 at Rocky Top Climbing in Charlottesville, Va. Those team members who aren't selected to compete there will participate in Liberty's fall event, the LaHaye Recreation Centers Bouldering Competition, this Friday from 2-9 p.m.

Gaunt said the future of the program is on a solid foundation.

"We are investing in the team members to become better, more well-rounded climbers," he said. "We are looking for student-athletes who really enjoy the sport and sharing their passion for climbing with others, and who desire to do their best to represent Liberty and the Lord in competitions."