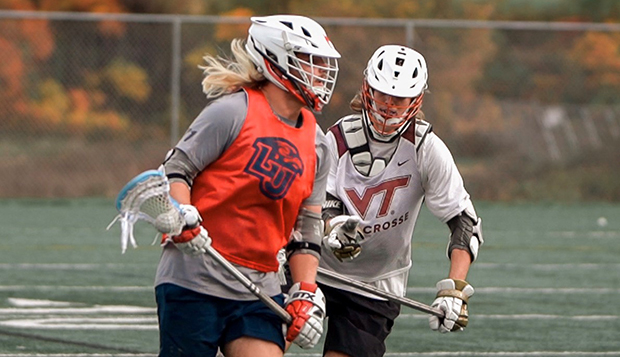 Playing at SELC Northwest Region rival Virginia Tech in its final fall season scrimmage, Liberty University's men's lacrosse team handled a great deal of adversity in the second half before emerging with a 13-11 victory.

"It was a good opportunity for our guys to show some resiliency," Flames Head Coach Kyle McQuillan said. "Give a lot of credit to Virginia Tech for battling back and making it a more competitive game."

The Flames had opened a 10-2 lead by halftime before playing a man down for the majority of the second half, when the Hokies rallied to tie the game at 11 midway through the fourth quarter.

"They had eight man-up opportunities in the second half," McQuillan said. "We weren't giving up much in six-on-six lacrosse, but we played pretty much the duration of the third quarter and half of the fourth quarter a man down. From my perspective, it wasn't undisciplined lacrosse on our part, but you can't blame the refs, and Virginia Tech took advantage of those opportunities."

With the game still tied late in the fourth quarter, Liberty senior attack Caleb Britton was unable to get out of the way of a teammate's shot and took a ball to his back, necessitating a trip to urgent care after he started to cough up blood.

"Prayers go up for him," McQuillan said, noting he was scheduled to have an MRI on Saturday night and will likely be left with a good-sized welt.

In heroic fashion, fellow senior attack Eli Britton filled in for his cousin and netted the go-ahead goal that the Flames would not relinquish.

"It was good to see him step up and kind of rise to the occasion and give us the lead back," McQuillan said. "We've got to trust our guys. When injuries happen and we need to make changes, we've got to rely on the people on the bench and Eli was a great example of that."

McQuillan said the Flames demonstrated poise under pressure and maturity in their response to the Hokies' comeback.

"The guys showed good understanding of being patient and battling through those situations," he said. "Obviously, calls weren't going our way and we were getting a little frustrated. But when push came to shove, and we needed a couple goals to gain that separation in the end, we got them."

The Flames maintained possession for most of the last five minutes of the contest.

"We were able to settle things down, stay out of the penalty box, take advantage of some late goals, and possess the ball on the offensive end for the last two minutes to kill the clock," McQuillan said. "It was good to come away with a victory. Fall Ball is not the regular season, but an opportunity to find out what your strengths and weaknesses are.

"We obviously gave Virginia Tech an opportunity to fight their way back into things and kind of took the foot off the gas and didn't close the game the way we wanted to. But our clock management was definitely one of the strengths the guys showed late in the fourth quarter."

The Flames have just over three months of conditioning and preseason practices before beginning their quest to advance to their third consecutive MCLA Division I National Championships when they start SELC play at Northwest Region rival Tennessee.