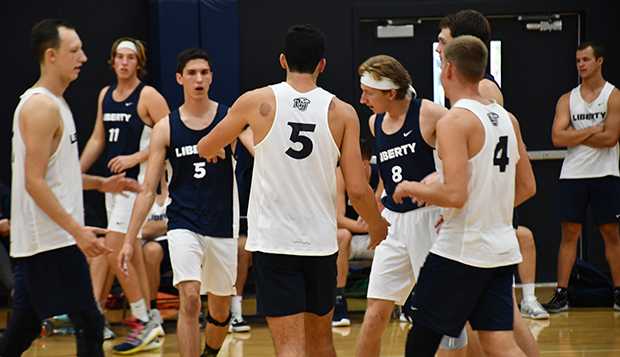 "That was fun, to mix it up a little bit and see what we'll look like and how guys respond," VanDePerre said. "We had a good day overall, playing a lot of different teams. A lot of guys grew up today through the matches, learning on the fly and putting things together that we've been working on which was awesome."

"It's definitely a change," Flames sophomore opposite hitter Cody Reinsma said of this year's team. "The coaching style is different and so we're trying to find our balance and dynamic with them. So far, things are going great. We're learning a lot of new things, so we're really building on a solid foundation and getting more complex skills now."

Though both teams lost to the Hokies and Cavaliers in two competitive games, they learned from the experience and will be better for it when they travel to Blacksburg, Va., on Oct. 26 for an even more challenging early-season tournament against mostly East Coast Volleyball Association (ECVA) opponents.

"Tech didn't graduate anybody and they grabbed a few new players, so they're looking really sharp this year," sophomore opposite hitter/setter Josh Knapp said after the Flames' 25-21, 25-20 loss to the Hokies. "From the look of it, they just have a little more chemistry from the start of the season. We just kind of threw our top lineup together, fitting a whole bunch of separate pieces into one, but we did surprisingly well for not having any practice."

"That was the first time we've played together as a team in the end, but that's a solid group of guys that when we work with each other, we're really going to be able to take it to another level," Reinsma said.

Reinsma and sophomore outside hitter James Morton sparked the Flames' red squad in kills as it defeated VCU and JMU's second team before losing to Virginia Tech's top squad by 25-23, 28-26 scores in pool play. Liberty then ousted the Dukes' top team in the semifinal.

"Today was a pretty big testing moment," Reinsma said. "We got to see strengths and weaknesses. We have a lot of new recruits and freshmen as well so we're seeing where each person can fit in and maybe what we can do this year to be even more competitive than we were last year."

The Flames' Division I team reached the Gold Bracket Final Four at the NCVF National Championships for the first time last spring, but graduated the nucleus of that starting lineup and Head Coach Bryan Rigg stepped down.

Rigg, a former standout libero for the Flames, joined middle hitter Gene Dejesus and setter Kaden Knepper as well as current Liberty Assistant Coach Scott Zalizniak on an LU Alumni team that finished 4-1 on the day. 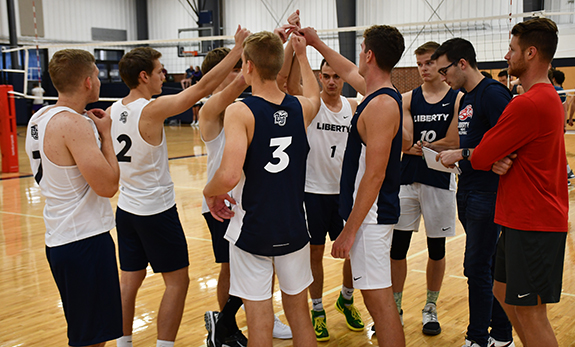 Liberty players huddle up during their finals match against Virginia's top team on center court.