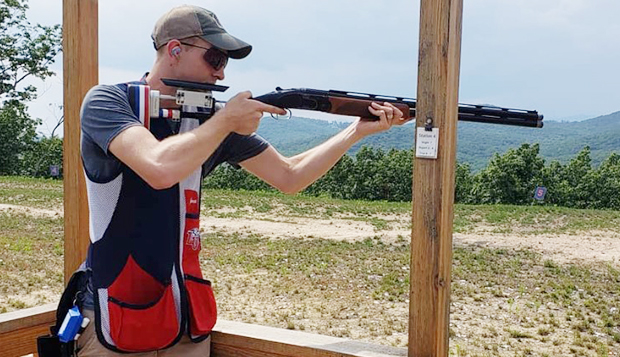 James Bushnell shot a 97 out of 100 in the Sporting Clays invitational competition to earn first place overall honors.

"That was the same venue as last year's (ACUI Upper East Coast Regional Championships) and we shot very consistently," Flames Head Coach Dave Hartman said. "We had six people shoot 90 or above, which is very, very good and it shows the depth of the team."

Junior James Bushnell was the overall individual champion with a round of 97 followed by freshman Austin Applegarth (94), sophomore Carl Pongs (93), and junior Jacob Davis (92) for a total of 376 out of a possible 400. The Flames defeated the host Terrapins (345) as well as George Mason (302).

"Based on the top four scores that each team posted combined, we far outdistanced the two competitors," Hartman said.

Liberty entered four of the five women in the event and junior Liz Wesner earned high individual honors by shooting a round of 86, followed by juniors Jessica Wilhelm and Maggie Woelffer and freshman Victoria Hendrix, who each totaled 73.

The Flames and Lady Flames will return to Glen Dale, Md., for this year's ACUI East Coast Regional Championships on Nov. 9.