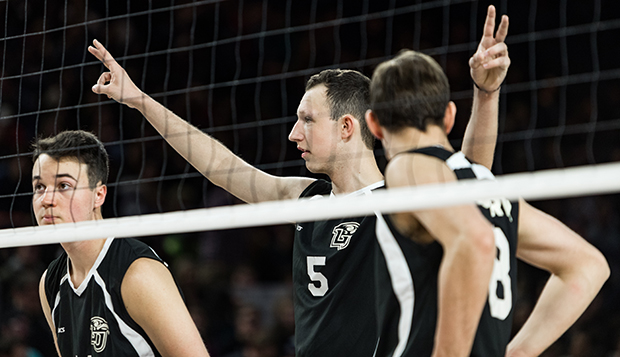 Sophomore Josh Knapp (center) will rotate between outside hitter and setter for the Flames. (Photo by Gabrielle Calhoun)

Rather than entering one Division I and one Division II team in Saturday's season-opening Fall Tournament at the LaHaye Multipurpose Center, Liberty University's men's volleyball team will showcase two balanced squads.

First-year Head Coach Kaleb VanDePerre plans to experiment with two fluid 10-man rosters throughout the semester, seeing the combinations that work best and giving everyone an opportunity to vie for positions in the DI lineup before the East Coast Volleyball Association (ECVA), East Coast Championships, and National Collegiate Volleyball Federation (NCVF) tournaments roll around in the spring.

"Every tournament we bring two teams to, we are going to try to have two good teams," VanDePerre said. "They will play in separate divisions, but they will be interchangeable."

In Saturday's 12-team tournament, which will feature two rounds of pool play, the Flames' two teams will square off against others from George Mason, JMU, Virginia, Virginia Tech, and VCU, as well as a Liberty alumni team.

"We are excited to play against someone other than ourselves this weekend," VanDePerre said. "This will give us a chance to play a lot of teams which is helpful this early in the season."

On one team, sophomore Tommy Speelman will be setting up sophomore outside hitters James Morton, and Logan Spieker as well as sophomore opposite hitter Cody Reinsma, freshman outside hitter Matt Marcinko, and 6-foot, 7-inch sophomore middle blocker Ben Dowd.

A second team will feature sophomore Josh Knapp, who will set and play opposite hitter when freshman walk-on Chase Keith is setting. Sophomore Tait Lapham will be splitting libero duties with Tommy Otte, a sophomore from last year's beach volleyball roster. Junior Sean Taggart and sophomore Cross Edwards will be the featured outside hitters while freshman John Sauder, sophomore Luke Marine, and junior Payton Smit will rotate at the middle blocker position.

"We are excited to see some of the new guys in action and to see how pieces fit together," VanDePerre said. "We have a bunch of outside and middle hitters, a lot of guys competing with each other to separate themselves for starting positions, which is really fun. We have been working really hard and it will be great to play and evaluate where we are and what areas we need to keep plugging away."

The Flames will also enter two squads in a 16-team tournament at Virginia Tech on Oct. 26, when they will meet mostly ECVA opponents, before going to Fairfax, Va., for a tournament at GMU on Nov. 9, when they could face the Patriots and a couple other NCAA Division I opponents.

"We're playing some competitive teams and will see what it will look like going into next semester," VanDePerre said.