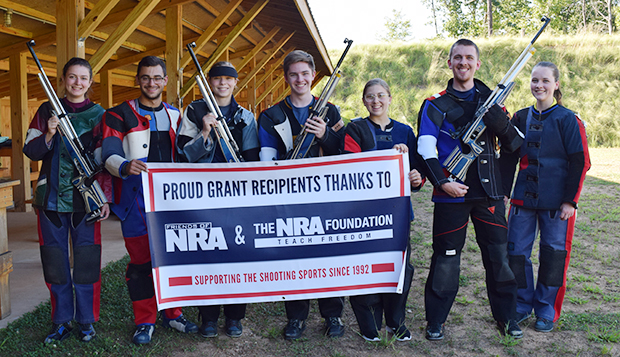 Liberty University's Club Sports shooting sports team received a grant from the National Rifle Association (NRA) of four Anschutz 9015 Club Air Rifles earlier this year. Valued at $2,000 apiece, the rifles have already been put to good use by the LU rifle team when they competed at the NRA Intercollegiate Rifle Club (IRC) Championships at Fort Benning, Ga., in March.

"We requested air rifles because we were a new team using borrowed equipment to go to the Sectional Championships in February," said Marlene Gray, who coaches Liberty's second-year three-position rifle team with her husband, Kevin. "We had four team members qualify there for (IRC) nationals using their own air rifles, and nationals was the first time we were able to use them."

In the grant proposal, Marlene Gray and Liberty shooting sports Head Coach Dave Hartman said the goals of the developing program are to use smallbore and air rifles "to teach basic shooting fundamentals, good sportsmanship through competition, and life skills such as responsibility, decision making and leadership," while training at the Liberty Mountain Gun Club (LMGC) rifle ranges.

In March, rifle team members attended a banquet at the Lynchburg chapter of the Friends of the NRA, which raised money for the grant. Flames sophomore Mitchell Feaga, who went on to win the smallbore national title and placed third in the air rifle competition in Georgia, was asked to speak about what rifle shooting means to him.

"That was a very special opportunity for Mitchell and other students representing Liberty's shooting sports program," Gray said. "He spoke about his involvement with the youth development program through his 4-H Club in Maryland as well as opportunities he has had to represent Liberty at NRA-sponsored shooting competitions."

Liberty's third-year shooting sports program concluded tryouts for the three-position rifle and Action Sports (3-gun pistol and rifle) team, coached by Hartman and Rick Warner, on Thursday. Hartman finalized his shotgun teams after a final round of tryouts on Friday.

"We had seven team members last year and by having these new rifles on hand, it allows students who don't have their own equipment to try out," Marlene Gray said of the rifle team, which included a balanced mix of male and female competitors.

This year, due to its success at nationals, Liberty's rifle team was invited to compete as a member of the Western Intercollegiate Rifle Conference that also includes Akron, Canisius, Clemson, Georgia Military, Grand Valley State, Michigan, Michigan State, North Dakota State, and Purdue.

Starting in October, the Flames and Lady Flames will compete in monthly smallbore and air rifle postal matches, where team members shoot at their own range and compare scores with conference opponents using the Orion Scoring System.

On Sept. 28, the team will compete against the University of Virginia at 4 p.m. at LMGC. UVA will again host this season's NRA sectional championships on Feb. 8 at the Rivanna Rifle and Pistol Club. The NRA Intercollegiate Rifle Championships return to Fort Benning March 19-22.