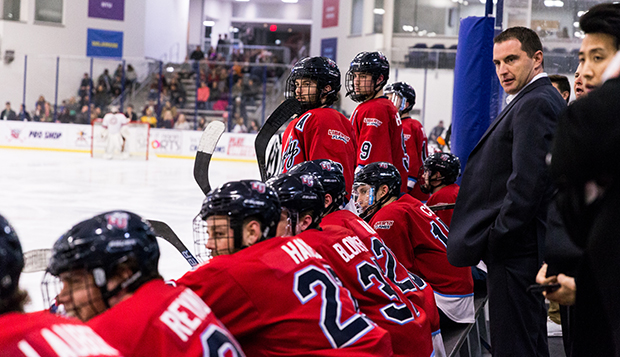 With the Sept. 20 season-opener against Duquesne University only six weeks away, Liberty University ACHA Division I men's hockey Head Coach Kirk Handy and his coaching staff are preparing for preseason camp set to begin next week.

"Our Club Sports Coordinator of Strength & Conditioning Chris Kerr is in contact with the players on a weekly basis to make sure that they're sticking to their workouts for the summer, and that will ramp up here when the guys report back in the middle of August," Handy said.

He is looking to build off the momentum the Flames generated over the past two seasons, when they consistently landed in the top 10 of the ACHA DI rankings and advanced to the National Championships in Columbus, Ohio, and Frisco, Texas.

"We saw a lot of progression in our team throughout (last) year and a lot of great steps that we took forward and a lot of building blocks going into (this) year," Handy said.

Success breeds success, and he believes the Flames' returning players and incoming recruits have the potential to take the team to the next level and experience their best season in program history.

"Great expectations every year are what we aim for and, really, we have three main goals: win the regular-season ESCHL conference championship, win the end-of-the-year ESCHL conference tournament, and then to win a national championship," Handy said. "All three of those things are at the forefront of our planning, of our recruiting, of our off-ice conditioning. Everything that we're doing is geared toward achieving those goals."

A strong class of freshmen recruits and transfers have fortified an already solid nucleus of returning players. They will help fill voids, including in goal, where Liberty lost seniors Cole Burack and Josh Halpenny.

"We're real excited, starting with the goaltenders Cedric (LeSieur) and Tyler (Myers)," Handy said. "We believe both of those guys will come in here and battle for the starting role. Both of those guys have had great junior careers, so we really feel like we have some great maturity there in net.

"On the defensive side of things, we're adding Dyma (Kobylyanskyi), Vitaliy (Novytskyy), and Colin (Baird) and we feel like all three of those guys will make our defense a whole lot stronger and will really add a competitive element to our defensive corps," he added. "Then, we've added Art (Laukaitis) and Matt (Bartel) up front and both of those guys can come in and push the level of compete within our forward group as well as become real effective players for us."

Handy said the team's focus is developing players to compete at the highest level throughout their careers at Liberty while preparing them academically, physically, spiritually, and socially to change the world as Champions for Christ.

"It's been neat to see God work in and through the players as we're dealing with them in the recruitment process and as they come here and grow each year and then go out and do great things with their careers once they graduate from Liberty," Handy said.

Registration is now open for the Flames' DI, DII, and DIII tryouts, set for Aug. 18-24.