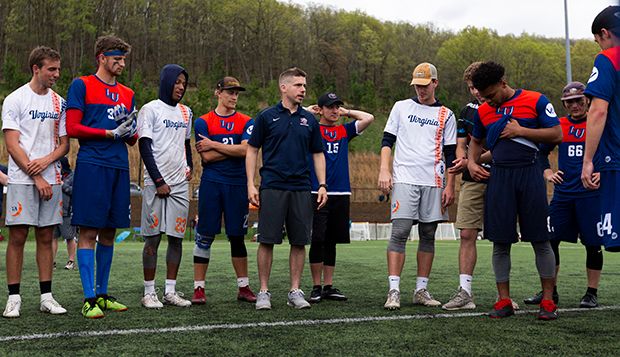 Men's Ultimate Head Coach Kevin Habermas huddles with his players and others from UVA at the April 13 Virginia Conference Championships at Liberty. (Photos by Gabrielle Calhoun)

"My dad is the most amazing guy I know," Kevin Habermas said. "I go to him for pretty much everything, and he gives great advice. He taught me how to grow relationships with people and how to care for and treat people in general. The Xs and Os are great, but they're people. Being able to relate to them and help them is something I enjoy doing. The goal is to create a family-like environment that leads to discipleship."

Kevin Habermas took over the team from longtime assistant and fifth-year Head Coach Brendan Phillips on an interim basis this past spring and led the Flames to their first tournament championship in late February.

"The guys really bought into the new systems really well and made it to regionals for the first time with a qualifying bid," he said. "We've got a lot of good players and everybody's all on board, playing as a team and not as individuals."

Habermas realizes the importance of making connections and a positive impact on players from other teams.

"Some opponents' only experience with God is through us, so we've got to take advantage of those opportunities," he said. "Both our men's and women's teams offer to pray with opposing teams afterward, and about 90 percent of the teams say ‘Yes.'"

Though Habermas learned how to formulate a winning team from his father (a former Flames men's hockey head coach and member of the inaugural Club Sports Hall of Fame), he learned more about the sport of Ultimate by serving as assistant to Liberty women's Ultimate Head Coach Jonathan Mast and playing with the Lynchburg Legion co-ed club team, which features about a dozen Liberty alumni.

"The experience I had with Jonathan was invaluable to learn the ropes and the do's and don'ts — to implement ideas and see what does and doesn't work in the college game," Habermas said. "You have to humble yourself and try to soak up as much as you can from the players around you who are more experienced."

Habermas studied philosophy at Liberty and developed a passion for the game in his college years by playing in community leagues (Liberty's team hadn't been formed yet). He has grown as a player and helped lead the Legion to a 5-3 record at this past weekend's first tournament, the Summer Glazed Daze in Winston-Salem, N.C. His next tournament with the Legion is at the Battle of the Beltway on July 13-14 in Northern Virginia.

He has picked up plenty of pointers from local player Taylor Brooks, who went on to play professionally for the New York Empire (one of the top 10-ranked teams in the nation), and is now the Legion's main handler. Other Legion teammates have also imparted their knowledge of the game to Habermas, including Flames assistant coach Brendan Kinne, rising junior Liberty players Dan Mills and Jake Norman, Taylor Engen, a staff member in Liberty's Office of Spiritual Development, Mast; former Liberty women's players Ashley (Condon) Mast, Jill (Hook) Engen, and Alexa Taylor; and his wife, Krista, who serves as a team captain.

"By playing with the Legion, you see different strategies and ways of playing the game," he said, noting that VCU's men's head coach is another teammate. "It is good to get different schools of thought, to see what does and doesn't work and teach the team."

Habermas and Kinne complement one another perfectly as coaches.

"We have different philosophies," Habermas said. "I'm more defensive-minded, so it helps having Brendan because he's more offensive-minded. That is why I worked well with Jonathan, too."

Habermas anticipates all 16 players on this past spring's roster returning this fall.

"That would be amazing, and hopefully we can get some good recruits to learn from them and develop a good foundation and keep it rolling," he said.