LU's No. 1 lacrosse fan Rolewicz will join its attack this fall 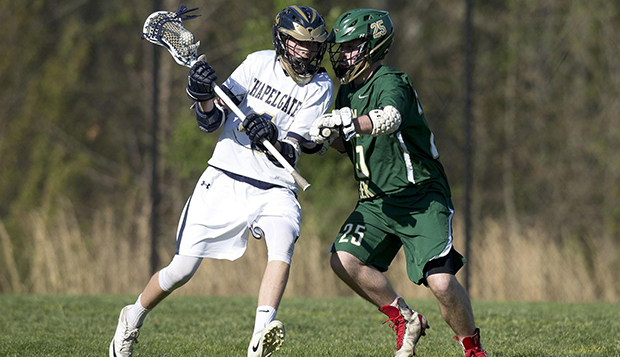 An avid fan of the Flames since his brother's playing days, Mark Rolewicz developed a passion for the sport by watching his older brother and following in his footsteps at Chapelgate (Md.) Christian Academy and now Liberty, where he will become the fourth member of his family to study on campus. John Rolewicz, the oldest of four siblings, graduated from Liberty last year with a degree in cinematic arts, and older sister, Katie, is a rising junior nursing major.

Mark Rolewicz's interest in Liberty's lacrosse program extends beyond his desire to play for the Flames. He created social media accounts following and promoting the team for several years, writing blog posts celebrating and predicting its successes in the SELC and the MCLA.

"I don't think you'll find another guy with as much passion and love for Liberty Lacrosse," Flames Head Coach Kyle McQuillan said. "He has proven, and not only in the recent past, that he is wildly dedicated to our program. If he can translate that passion into his work ethic in practice and learn from the upperclassmen, he can slowly transform into a productive member of our offense."

Rolewicz brings in excellent credentials as a player, as well as a booster. Raised in Ellicott City, Md., a lacrosse hotbed, he made the varsity team all four years at Chapelgate, which competes in one of the best high school lacrosse conferences in the nation. He served as captain for the Yellow Jackets his junior and senior seasons, setting a single-season scoring record with 64 goals and 12 assists this spring after netting 49 goals and distributing 20 assists as a junior.

"He comes from a rich lacrosse culture and has been able to experience success at the high school level," McQuillan said. "It will be a step up in the level of play and the size of (opposing players) and speed of the game (but) he should be coming in with a lot of confidence."

Over the summer, Rolewicz, who's 6-feet, 2-inches tall and weighs 170 pounds, will work with a strength and conditioning coach to bulk up and improve his speed so he will be prepared to adjust to the pace of the Flames' offense.

Rolewicz considers Liberty Assistant Coach Brett Bernardo — who played attack for the Flames when his brother was on the team — a mentor after meeting him then and at Flames Lacrosse Camps in recent summers. He looks up to rising senior attack Caleb Britton and is excited to train under him in the upcoming year.

"I'm someone who wants to learn from and try to fill his shoes," Rolewicz said of Britton, Liberty's second-leading scorer over the past three seasons.

Academically, he plans to pursue a degree in international business.