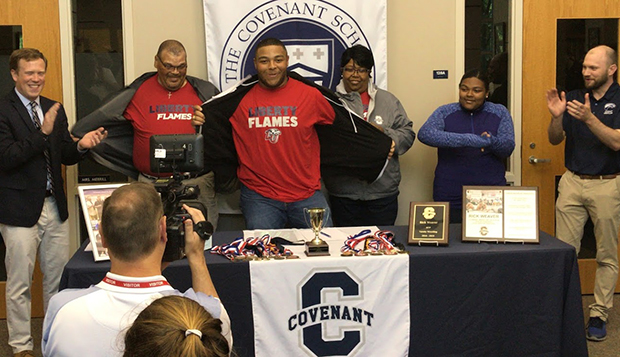 Rick Weaver reveals Liberty as his college choice during a signing ceremony at The Covenant School. (Submitted photo)

Weaver, who finished 175-23 for his career at Covenant and became the Eagles' first multiple state champion, said he felt called to Liberty, choosing the two-time defending NCWA National Duals and NCWA Grand National champions over Virginia, Virginia Tech, and other NCAA Division I programs.

"I just really enjoyed everything about Liberty — the Christian walk and walking with Christ and seeing how He can change your life," he said. "They train you to be Champions for Christ and it's going to be an awesome experience. My parents, they brought me along this far and so everything I want to do is for God and for them."

Weaver, whose sister Tamira is a rising sophomore studying early childhood education at Liberty, plans to pursue a degree in health and fitness or exercise science, with a career goal of becoming a physical trainer.

Flames Head Coach Jesse Castro said Weaver and four-time VHSL Class A state champion Ethan Martin are two of the better recruits he has had since the program dropped down from the NCAA Division I ranks in 2011. He said only former national champions Ryan Diehl and Josh Llopez, who transferred to NCAA Division I Maryland after leading Liberty to its first NCWA Grand National Championship in 2015, came to the Flames with better résumés.

"These guys are four-time defending champions, so for a club team to get this kind of a recruit is pretty impressive," Castro said. "Rick has had an illustrious career at the Covenant School and we are so blessed to have a commitment from him to attend Liberty and become a member of our team."

Former Flames heavyweight Josh Travers, who graduated in 2016 and helped coach the women's wrestling team from 2016-18, worked with Weaver this past season at Covenant.

Weaver and Martin will provide added depth in the Flames' upperweight classes, with two-time defending national champion Austin Amos returning for one more year at 197 pounds; Jeffrey Allen, a transfer from Virginia Tech, looking to defend his 235-pound national title; and Weaver to spar with graduate David Smith at heavyweight.

"We've got some latitude … we can use those guys interchangeably at the upper weights," Castro said. "To have four wrestlers of that caliber up there puts us right back to where we were last year."