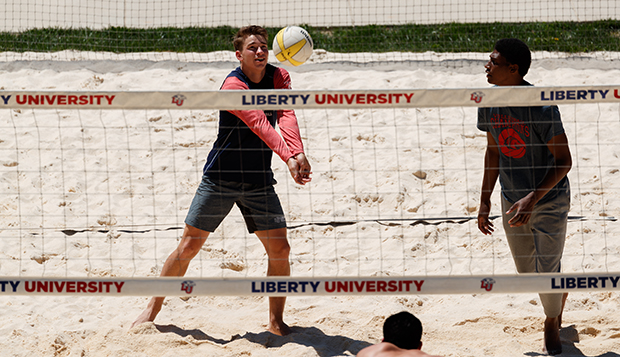 "It was another good season-ending event, seeing a lot of teams from other schools," Liberty Head Coach Kaleb VanDePerre said. "Hopefully, we will do it a little bigger and better next year."

Fresh off leading the Flames' Division I indoor volleyball team to a program-best top-four finish at the National Collegiate Volleyball Federation (NCVF) Championships April 18-20 in Denver, Knepper and Dejesus swept Martyn and Slaughter, 21-14, 21-9, in the final.

Both Martyn and Slaughter and Flames senior Matt Jones and freshman Joshua Knapp finished pool play undefeated. Jones and Knapp, who will join Knepper and Dejesus at the May 10-12 USA Volleyball Collegiate Beach National Championships in Hermosa Beach, Calif., were upset in the first round of playoffs by UNC Chapel Hill's Pablo Portes and Aaron Darden, 21-19.

Liberty did not qualify any of its women's duos for nationals, or the finals of Saturday's Gold Bracket, which pitted two Tar Heels pairs who eliminated two Lady Flames tandems in the semifinals.

"Meg and Courtney played really well to get to the semis," Van DePerre said. "They showed the most improvement on the year. Olivia and Amanda didn't play their best but still had chances to win. UNC played really well and put the best teams together when it mattered most."

Then on Sunday, Liberty hosted a co-ed tournament with 35 teams of mixed doubles players, with 14 competing in the open bracket and 21 in the AA bracket. It was Liberty's biggest co-ed tournament to date.

Knepper and Dejesus and Jones and Knapp will work with Virginia women's indoor volleyball Assistant Coach Hudson Bates, who played professionally on the AVP Tour from 2007-2016, before flying to California next week. They are two of 16 men's tandems and another 50 women's pairs registered for the national tournament.