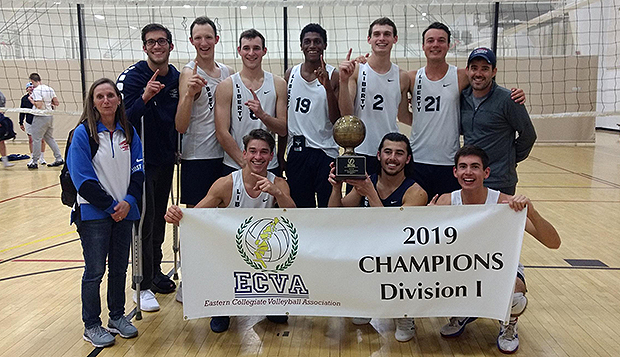 Senior setter Kaden Knepper was named Tournament MVP and senior middle blocker Gene Dejesus and freshman opposite hitter Josh Knapp were selected to the All-East Coast First Team after leading the Flames to a 6-0 record, capped by a semifinal sweep of Virginia Tech and championship sweep of North Carolina State.

NC State was a surprise finalist after it upset No. 10 Central Florida and No. 7 Penn State in the playoffs.

"That's good for our division because three of the top four teams at the East Coast Championships were from the South," Flames 10th-year Head Coach Bryan Rigg said.

Liberty,  ranked third in the nation behind only UC-Santa Barbara and San Diego State, played without senior outside hitter Andrew Eves and senior middle hitter Zach Martyn, who was sidelined with a sprained ankle.

"We were a little shorthanded but figured out a way to dig deep and win the tournament," Rigg said. "Part of the reason we won was great aggressive serving from our five jump servers and good passing and great defense from all six of our guys on the court. All eight guys on the active roster played a vital part and really came together to win."

"In the semifinals and finals, we were pretty dominant," Rigg said. "Our jump serves were the difference. They changed the whole dynamic of the game, because teams couldn't pass and were getting out of system and couldn't find a rhythm."

The Flames will likely be seeded third at nationals, positioning them among the favorites in the top 48-team DI bracket.

"We came close last year, but we have never made the gold bracket (for the top 16 teams) at nationals and that is one of our goals," Rigg said. "This should set us up for good draws in the first two rounds."

Also on Saturday, Liberty's DII team won a three-game rematch with Virginia Tech — the team it defeated for the ECVA South championship — in Saturday's semifinal round before losing to Penn State in a three-game East Coast Championship final battle.