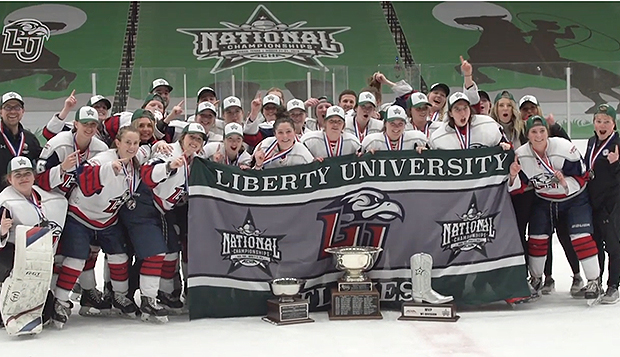 The Lady Flames celebrate their third ACHA DI national title in the past five seasons after Sunday's 5-2 victory over the Lynx.

Top-seeded Liberty University's ACHA Division I women's hockey team opened a 3-0 lead and fended off a second-period rally by No. 3 Lindenwood-Belleville to pull away for a 5-2 triumph in the ACHA DI National Championship final, Sunday at Comerica Center in Frisco, Texas.

The Lady Flames (28-1-3) got goals from five different players to defend their title and win their third trophy in the past five seasons. Junior goalie Nadia Rupoli made 24 saves, the most she had been tested in the tournament, and junior forward Vanessa DeMerchant earned tournament MVP honors after netting two goals and distributing five assists in four games.

"It's pretty unbelievable," DeMerchant said. "It's one of the best feelings I've ever had in my life. I just am so proud of our team and the way we came together this year. We battled through some adversity, but in the end we came out on top."

Liberty capitalized on its first power play opportunity at the 14:27 mark of the first period when DeMerchant won the puck and sent a crossing pass to sophomore forward Danica Polson, who trapped it in the left crease and blasted it past Lynx goalie Hannah Stone.

Just over four minutes later, sophomore forward Shelby Bradford won a faceoff back to graduate defenseman C.J. Tipping who launched a wrist shot from the left point that glanced off the stick of Stone into the top left corner for a 2-0 advantage with 10:13 left in the opening stanza.

Senior forward Lauren McDonald padded Liberty's lead to 3-0 just 35 seconds into the second-period with a shorthanded goal on a shot from the high slot that beat Stone inside the left post.

The Lady Flames outshot the Lynx, 4-1, on that penalty kill, nearly adding another score when junior defenseman Emily John sent a fast-break pass to McDonald whose shot glanced off the outside of the right post.

But Lindenwood-Bellville (22-5-3) battled back, punching in back-to-back goals in a span of just over a minute midway through the second period to cut the deficit to 3-2.

After the Lynx won a faceoff in the right circle in Liberty's zone, center Ashley Dietmeier pocketed a putback in front past Rupoli, ending the shutout at the 9:33 mark.

Rupoli couldn't glove Jessica Walker's shot from the right point in traffic around the cage. Lindenwood-Belleville defenseman Katie Stelling slipped the loose puck under Rupoli, making it a one-goal game with 8:27 left in the second period.

Rupoli allowed just three goals in four games, playing all but one period, and received plenty of offensive support in posting four wins in five days, including two insurance goals in the third period on Sunday.

At the 17:52 mark, DeMerchant skated the puck up the right wing and into the center of the circle where she lifted a wrist shot past Stone into the top-left corner of the cage, stretching the Lady Flames' lead to 4-2.

Lindenwood-Belleville pulled Stone for the final two minutes after going on a power play with 2:35 to go, giving it a six-on-four advantage until the Lynx were penalized for having seven players on the ice.

That put the teams at four-on-four for a minute and a half and gave the Lady Flames a power play for the final 35 seconds, allowing junior forward Aly Morris to steal the puck along the left boards and shoot from 50 feet into an open net, adding an exclamation point to the victory with 11.4 seconds remaining.

The Lady Flames celebrated by pouring out of the bench onto the ice to storm Rupoli and their teammates around Liberty's cage before captains DeMerchant, McDonald, Tipping, and junior defenseman Dana McLeod hoisted the championship trophy during the awards presentation.

"First of all, glory to God in all the success our team had all year on and off the ice," Liberty second-year Head Coach Chris Lowes said. "What an incredible group of girls — 23 young ladies that are just champions. Aside from the hockey part of it, it's a great group and I enjoy being around them." 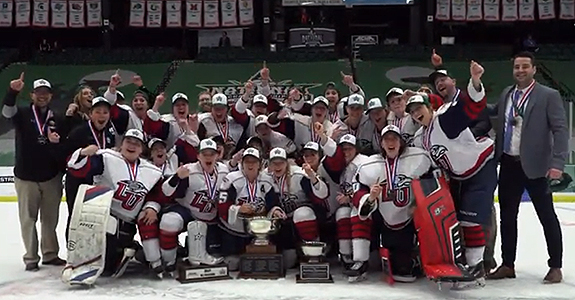