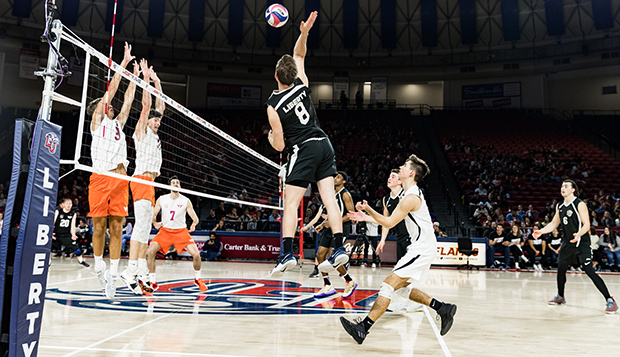 Sophomore outside hitter Sean Taggart was one of the Flames' leaders in kills at Virginia Tech. (Photo by Gabrielle Calhoun)

Playing in the East Coast Volleyball Association (ECVA) South Division tournament at Virginia Tech, Liberty University's Division I men's volleyball team was denied its first title by the host Hokies in the final.

"It was a disappointing championship game for us because we had beaten Virginia Tech three times this year," Flames Head Coach Bryan Rigg said, noting that the Hokies revised their game plan from the teams' previous meetings, shifting players around and running systems Liberty hadn't seen before.

"They had lots of fans there, the atmosphere was pretty loud and intense, and they played their best match I think they've had all year," Rigg said. "Our best game would beat their best game, but it was not our best game and they came to play and looked like a really motivated team out there."

Offensively, Liberty leaned on its outside hitters, freshman James Morton and sophomore Sean Taggart, who led the team in hitting attempts and kills, finishing assists from senior setter Kaden Knepper.

"Kaden had a really good day," Rigg said. "His serves were on, his sets where they needed to be, and he showed leadership and determination as a senior, really pushing the guys. James had a great game and continues to hit around .400. He's smart and so big and jumps so high that he rarely hits a ball that gets touched at the net."

Senior middle hitter Gene Dejesus led the Flames in blocks and ranked third in kills while freshman Joshua Knapp was second in blocks and fourth in kills.

Senior Brady Quakenbush moved from outside hitter back to libero and contributed scrappy play on defense, good communication, and accurate serve-receive passing, leading the team in digs.

The Flames are hoping to face the Hokies again at the April 6 East Coast Championships, hosted by the University of Maryland.

"We would be really excited to get a rematch with them and beat them on a neutral court," Rigg said. "We're a better team and we would love to be able to demonstrate that there. That's where we are setting our sights because when the final rankings come out, it's going to be the East Coast championships that teams will remember. We haven't done anything we can't undo."

Liberty, the No. 11 team in the NCVF DIII rankings, opened Saturday's pool play with a victory over George Mason, winning the deciding third game 15-11, before sweeping Appalachian State and finishing 3-0 in its bracket. It then eliminated Longwood in the semifinals, 25-17, 25-19, before overcoming the sixth-ranked Hokies to win their second ECVA South tournament title.

If the Flames' DII team can upset Virginia Tech again as well as top-ranked Penn State at the April 6 East Coast Championships, it could be seeded in the top three going into the NCVF National Championships set for April 18-20 in Denver.

"I would love to go into the national championships with two teams ranked in the top five," Rigg said.