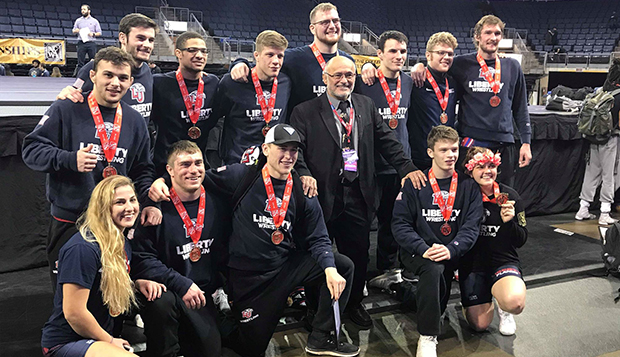 The Flames won a school-record five individual titles and had 11 All-American (top-eight) finishes to pull away from Mid-Atlantic Conference rival Apprentice School, 201.5-164, and clinch their third NCWA Grand Nationals trophy in five years.

"It was the most amazing championship round I've ever seen," Liberty Assistant Coach Chris Williamson said. "Teams rarely put five wrestlers in the finals and it's even rarer to win all five. Every single match was very tightly contested and very hard fought. It was unbelievable."

The decisive team triumph comes on the heels of last season's dramatic half-point win over the Builders and Liberty's fourth NCWA National Duals title, Jan. 25-26 in Mesquite, Nev., where the Flames rallied from behind to beat Apprentice to become the first program to win that event in back-to-back years.

"Last year, we had to wait until the final match to know who was going to win," Williamson said. "This year, it wasn't even close. We just had too much firepower."

"Cendall and Risse Manley were dominant," Williamson said. "It wasn't even close."

Liberty's five champions in the men's team competition was three more than it had ever won before, though it had twice had five finalists. Flames senior heavyweight Dominick Johnson became a three-time All-American and captured his first national championship by scoring an 8-4 decision over Jesse Gaudin of third-place Central Florida (129.5 points).

At 197, Flames senior Austin Amos, Liberty's only individual champion last season at 235 pounds, met Apprentice's defending 197-pound champion Ross Graham in the last match of the night, a rematch of their first encounter in the MAC Tournament final, won by Graham. After opening a 2-1 lead in the first period, Amos scored a reversal and added two back points in the second to extend it to 6-2 before riding out a 10-5 triumph.

At 149 pounds, Liberty sophomore Chad Cantrell scored a 16-10 decision over Apprentice's Tristan Mabe in the consolation semifinals before pinning Florida's Tyler Sage 5:44 into his third-place final.

Junior Luke Ely won his 165-pound consolation semifinal match over Farmingdale State's Stephen Illicete by 15-0 technical fall in 5:11 before letting a 3-1 lead slip away in a 4-3 loss to UCF's Clay Perry in the third-place final.

Liberty graduate David Smith earned All-America honors at 235 pounds by bouncing back from a 7-5 loss to Apprentice's John Pierce in the consolation quarterfinals to defeat Rowan's Michael Mascioli in the seventh-place bout.

At 174 pounds, senior Cody Richmond bounced back from dropping a 14-2 major decision to Florida Gulf Coast's Vincent Levin in the consolation quarterfinals to win his seventh-place match by 10-5 decision over Akron's Brice Locklear.

Flames senior co-captain Josh McIlhenny, seeded second at 184 pounds, defeated JMU's Ryan Thomas, 8-5, in the consolation quarterfinals before being pinned by Middle Tennessee State's Joshua Feuerbacher in 48 seconds in the semifinal round. That set up a fifth-place final against Iowa State's 12th-seeded Cullin Brendeland, who he required just 26 seconds to pin. 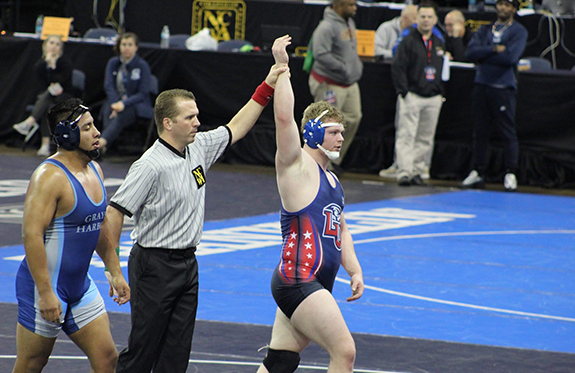