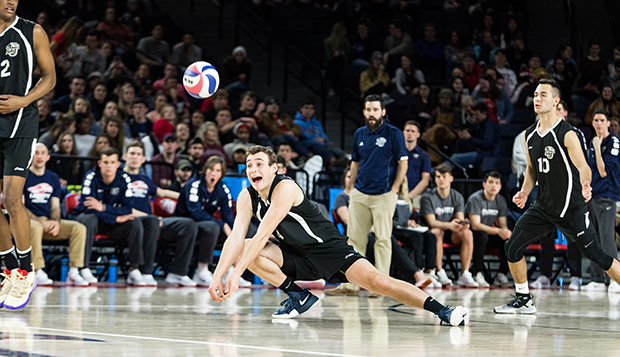 Freshman outside hitter James Morton dives for a dig in the fourth game against Virginia Tech in the Vines Center. (Photos by Gabrielle Calhoun)

Despite a slow start against rival Virginia Tech, Liberty University men's volleyball team rose to the challenge and opened its spring semester with a 25-27, 25-21, 25-21, 25-23 victory over the Hokies early Saturday morning for the annual Midnight Mayhem match in the Vines Center.

"In the midst of a big moment when nerves are high, they found a way to get the victory," Flames Head Coach Bryan Rigg said. "But they are so much better and I can't wait for everyone to see them at their best."

Liberty bounced back from a first-game loss to take Game 2, with freshman opposite hitter Joshua Knapp and senior outside hitter Brady Quakenbush getting the Flames out to an early lead with several kills before sophomore outside hitter Sean Taggart hit a winner off a Virginia Tech block on game point.

In Game 3, Taggart contributed back-to-back kills to pull the Flames even at 12-12 before Knapp kept the score tied at 14-14 by answering with two spike winners off Virginia Tech blocks.

Senior setter Kaden Knepper went on a four-point service run, highlighted by Knapp's kill from the right side, to boost Liberty's lead to 18-14.

Knapp hit three more winners to help the Flames extend their advantage to 23-18 before senior middle hitter Gene Dejesus spiked one kill down the right sideline and another off a block on game point.

Freshman outside hitter James Morton, playing his first match at the Division I level after starting his season with the DII squad, made his debut in the fourth game and helped the Flames put the Hokies away, starting with a lightning-quick kill on the first point and a deft dink winner on the second.

Taggart delivered three of the Flames' next four points on cross-court kills before Dejesus dinked a winner barely over the net and Morton made a stuff block after senior opposite hitter Andrew Eves kept the point alive with a saving dig to open a 10-4 advantage.

"We have so much talent this year, it's crazy," Dejesus said. "We can go to anyone on our team and we know that they'll get a kill."

A tip by Knepper for a winner and a two-handed tap-down block by Knapp stretched Liberty's lead to 14-8 before Morton spiked a kill down the left sideline and Knapp came up with another stuff block to make it 17-12. Morton strung together three consecutive kills before Knapp closed out the match by winning two of the last three points, putting the Hokies away with authority on a powerful cross-court kill set up by Knepper.

"Our team is really good this year at fighting through adversity and coming back and finishing games, and it showed today," Dejesus said. "This is a great way to start off the semester with a win. The crowd was great."

Morton said the Flames fed off the crowd, which flocked to the Vines Center en masse to support them.

"It's definitely an experience not many people get to have so it's awesome that Liberty puts it on for us," he said. "I'm looking forward to the next couple years."

Liberty will have home-court advantage again next Saturday when it hosts the only ECVA South Division Play Date of the season in the LaHaye Multipurpose Center. There will be 10-team DI and nine-team DII brackets with the top two teams in each receiving autobids to the April 6 East Coast Championships at Maryland.

"The guys are motivated because they know they've done better," Rigg said. "They really want to take this week and commit to it to get ready for Saturday. They're ready to go back to work."

The NCVF National Preseason Rankings are scheduled to be released on Wednesday and Rigg expects both Flames squads to be ranked in the top 10 for the first time in program history. 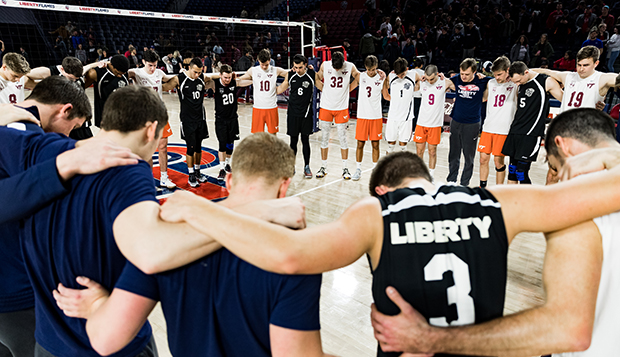 Members of the Flames' and Hokies' teams pray at center court after the four-game, late-night battle.