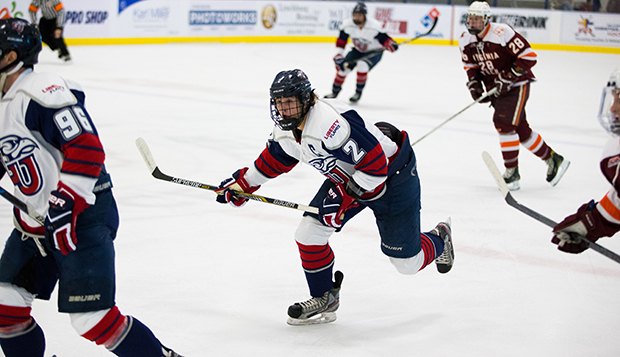 The Flames (12-3-2) clinched the best-of-three "Battle of the Blue Ridge" series by winning Friday night's game hosted by Virginia Tech at the Lancerlot Sports Complex in Vinton, Va., 8-2. Liberty had defeated the Hokies, 9-1 at LaHaye, in the teams' first meeting on Oct. 14.

Crilly and Roy tacked on third-period goals for the final scores and freshman goalie Dakota Cyhaniuk made 20 saves in the win as the Flames outshot the Hokies, 43-22.

In Saturday's rematch at Liberty, Kettelle netted his first goal as a Flame off an assist from junior defenseman Brandon Drumheller just over two minutes after the opening faceoff before freshman left wing Cullen Briggs finished a feed from Drumheller. Senior forward Eric Masters pushed the Flames' advantage to 3-0 off assists from Nash and Crilly.

Virginia Tech pulled within 3-2 on back-to-back goals by Hoey and David Dachille before Masters responded with his second score, assisted by Martin with 2:24 left in the first period.

Less than two minutes into the second period, Kettelle netted his second goal off a backdoor assist from Crilly before the Hokies rallied to trim the deficit to 5-4 with two goals over a three-minute span. Kettelle completed his hat trick off an assist from senior wing Matthew Perri before Crilly padded Liberty's lead to 7-4, converting a pass from Doe to cap the Flames' scoring.

Virginia Tech netted the only goal in a third period plagued by 12 penalties.

Liberty outshot Virginia Tech, 46-30, and sophomore goalie Adam Partridge made 25 saves to raise his record to 10-2-1.

The Flames ended their fall schedule by winning 10 of their final 11 games. They will open the spring semester by hosting a Jan. 18-20 showcase against Maryland, Marist, and Cincinnati.