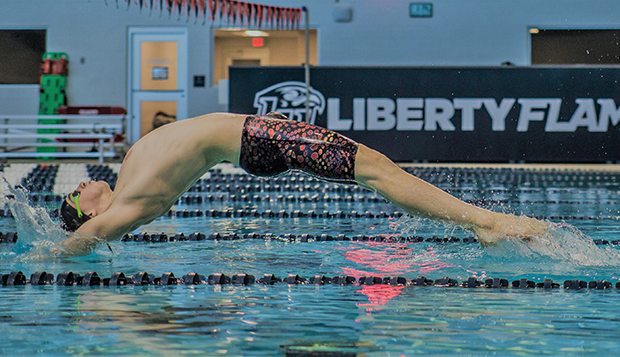 Matthew Davidson starts in the backstroke for Lynchburg YMCA at the Liberty Natatorium. (Photos courtesy of Brian Sennett)

The first commitment for Liberty University's men's swimming & diving team for the 2019-20 recruiting class, Matthew Davidson from nearby Forest, Va., is among the most decorated swimmers for the second-year program.

"We have been in contact with him for a while," Grishaw said. "He's definitely a high-end (NCAA) Division I-caliber swimmer with the times that he has had, and a top athlete all-around. He is the real deal."

For the Lynchburg YMCA team, Davidson holds club records in the 100 and 200 back, 50 and 100 freestyle and several relays. He has competed in the YMCA long-course and short course national championships.

He committed to Liberty after being recruited by a handful of NCAA Division I programs.

"When he came to Liberty, he had a feeling that he was at home, being on campus and seeing the benefits we have to offer, and all the amenities we get to use," Grishaw said.

Davidson, the younger brother of sophomore Ben Davidson who swam for the Flames last fall, had the opportunity to compete at the Liberty Natatorium with his Lynchburg YMCA team over the summer and again in September, when he met members of the current Liberty swim team.

"I love the facility and I really do like the team atmosphere there," Davidson said.

Davidson has aspirations of qualifying for the U.S. Olympic Trials in 2020, but will place a high priority on academics at Liberty, where he plans to major in exercise science.

"I want to get a good education and see where God takes me," he said. "As far as swimming, I am hoping to go to (Collegiate Club Swimming) Nationals and win a national title my first year there next year."

A two-time USA Swimming Scholastic All-America Team member, Davidson is one of 16 finalists for the Virginia Sports Hall of Fame Student Athlete Achievement Award, which recognizes the top student-athletes at any classification in all sports state-wide.

"That means a lot to me, to be able to show what I've been able to do through hard work and with God working through me," Davidson said.

"He meshes well with the Christian culture here," Grishaw added. "He definitely wants to put his faith first. Swimming is something he is able to glorify God through and Liberty is a place he can do that more than at other schools."