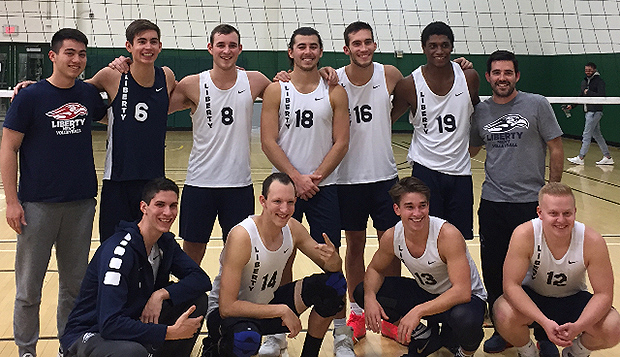 Liberty's NCVF Division I team was the only club squad at the George Mason Fall Fellowship Tournament and the only team that did not lose a match.

"Club teams hardly ever get a chance to play a Division I team and to beat one is unheard of, so it was a very significant deal," Flames Head Coach Bryan Rigg said. "For us and them and the home crowd, it was totally unexpected. We turned some heads and I heard a lot of people say, ‘You guys are the best team here,' which was really encouraging."

GMU is one of only eight NCAA DI programs in the Eastern Intercollegiate Volleyball Association (EIVA), and the Patriots won the EIVA title in 2017 over teams that include Charleston, George Mason, Harvard, Penn State, NJIT, Princeton, and Saint Francis. They were the first NCAA DI opponent Liberty has ever played.

"It is a really big volleyball program that recruits internationally as well as (regionally)," Rigg said. "We played a good game, they were kind of off their game, and we capitalized."

"We were the only team in the tournament that didn't lose a match during the day," Rigg said, who substituted freely throughout the day. "We didn't have to play our starters against all of these varsity teams. We went 11 players deep without much of a dropoff. That is a good feeling for when the National Collegiate Volleyball Federation (NCVF) National Championships come around (April 17-20 in Denver), to be able to trust all of those guys."

The Flames relied on their go-to tandem of senior middle hitter Gene Dejesus and freshman opposite hitter Josh Knapp, who both finished with better than .400 hitting percentages.

"If we can get them the ball, we're going to win consistently," Rigg said.

"That's the thing that keeps us going — good passing," Rigg said. "Kaden's serve wasn't on, but his distribution was great."

Quakenbush and Koloff showcased excellent jump serving to pace the Flames in aces while Dejesus recorded the most kills and blocks.

"We really took a step forward in defense, especially early in the morning against George Mason, when we had a lot of great digs and played scrappy volleyball," Rigg said.

Meanwhile, Liberty's NCVF Division II team traveled to a 20-team tournament hosted by UNC Chapel Hill, where it won two of its three matches in its pool to advance to the 10-team Gold bracket.

This Saturday, the Flames' DI and DII teams will both compete for the fourth time at a Lancaster Bible College tournament featuring NCAA DIII programs including other Pennsylvania schools Alvernia, Cairn, and Messiah. Liberty's DI team has twice finished runner up before its DII squad did last November, eliminating the DI team in the semifinals.