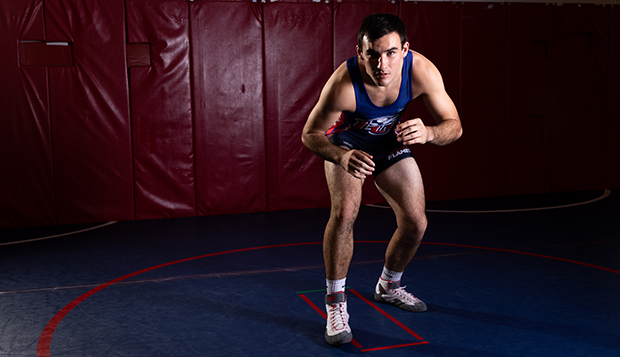 Sophomore David Cox and senior captain Austin Amos both went 4-0 en route to their respective titles at 165 and 197 pounds.

Cox won his first match by pin in exactly 3 minutes over Messiah's Tyler Riley before scoring a 13-6 decision over Ursinus's Jarrett DiGiantomasso to reach the semifinals. He won his last two bouts by major decision — 13-4 over Ursinus' Jason Zollers and 10-2 in the final over Messiah's David Stevens.

Amos, the reigning 235-pound NCWA national champion, dropped down to 197 and won four consecutive decisions to capture the crown. He started with a 6-2 conquest of Johns Hopkins' Karl Tayeb before scoring a 14-2 major decision over Elizabethtown's Dan Gorman, shutting out Gettysburg's Michael Iodice, 7-0, and edging Wheaton's Max Gierke, 2-1, to claim the championship.

The Flames also had a friendly duel for third place at 285 pounds between freshman Jeff Allen and senior captain Dominick Johnson, with Allen scoring an early takedown and emerging with a 3-2 win.

Both Allen and Johnson won their first two matches before falling to the losers' bracket. Allen won by pin in 1:24 over Elizabethtown's Quinn Hogue and 6-3 decision over Ursinus' Zebulin Pfeiffer before dropping a 2-1 decision to Gettysburg's Paul Triandafilou. He then pinned Messiah's Carter Urich in 2:02 to advance to the consolation final.

Johnson scored a 13-2 major decision over Elizabethtown's Maxwell Rhoden in his first match before pinning Urich in 6:54. He lost a 7-3 decision to Wheaton's Darien Kaufmann before doubling up Ursinus' William McGinley, 6-3, to reach the third-place final.

"Having two champions and our two heavyweights battling for third place in our first tournament of the season is definitely good for us," Liberty Head Coach Jesse Castro said. "There is a lot of fight in these guys. They showed a lot of potential and it is a good stepping stone to get to where we need to be."

At 174 pounds, junior Sam Karel won his first two matches, pinning Gettysburg's Sal Puglisi in 6:24 and earning a 6-4 decision over Johns Hopkins' Nathan Wertheimer before being eliminated with back-to-back losses.

Senior captain Josh McIlhenny also finished 2-2 on the day, winning his first match by 19-1 technical fall over Wheaton's Luke Gentry before being knocked to the consolation bracket by dropping an 18-5 major decision to Messiah's Brian Shermeyer. McIlhenny advanced with a fall of Messiah's Joe Embleton in 2:49 before being ousted by Elizabethtown's Dayne Ross, by 9-2 decision.

Cendall Manley, the two-time defending women's national champion, lost her 165-pound bout by fall in 3:00 to Ursinus' Zollers while her older sister, Charisse Manley, who enrolled in graduate school this fall, also wrestled, receiving a first-round bye before losing by 11-3 major decision to Elizabethtown's Harry Marr.

The Flames will travel to Pennsylvania again next Saturday to compete in the Ursinus Fall Brawl Open near Philadelphia.