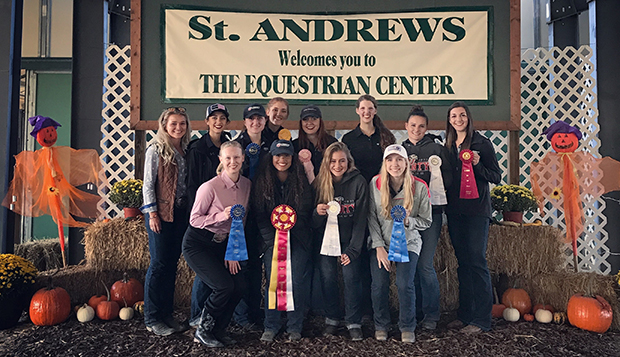 It was an action-packed weekend for Liberty University's equestrian teams, with its Hunt Seat and Western riders hosting the University of South Carolina in a scrimmage at the Liberty Equestrian Center on Saturday before its Western travel team opened its season at St. Andrews (N.C.) University on Sunday.

The Lady Flames, who compete in the Intercollegiate Horse Shows Association (IHSA), were extremely competitive against the NCAA Division I Gamecocks, with their Hunt Seat riders winning the head-to-head format, 3-2.

USC's Western riders won two of the head-to-head competitions and tied with Liberty in the other three divisions, lifting the Gamecocks to a 4-3-3 victory over the Lady Flames in the combined team totals.

"It was a fantastic opportunity for our students to compete against an outstanding program," Liberty Head Coach Suzanne Flaig said. "They are a DI varsity program and we had some very close matchups with them. I was very happy with the level at which we performed."

This show was the coaching debut for Assistant Coach Madeline Shrode, the former All-American Western rider at Tennessee-Martin.

"It was a very exciting and busy weekend for the Western squad," Shrode said. "Having the scrimmage against USC was a perfect warm up for the competition the following day. All of our riders went in and were able to have solid rides. Overall, it was a great start to a very promising season."

Both Liberty teams will travel to shows this weekend. The Western team returns to St. Andrews to wrap up its fall schedule on Saturday and Sunday. The Hunt Seat team competes at University of Richmond on Saturday before concluding the semester with another Region 4 show Nov. 17 at Christopher Newport University.