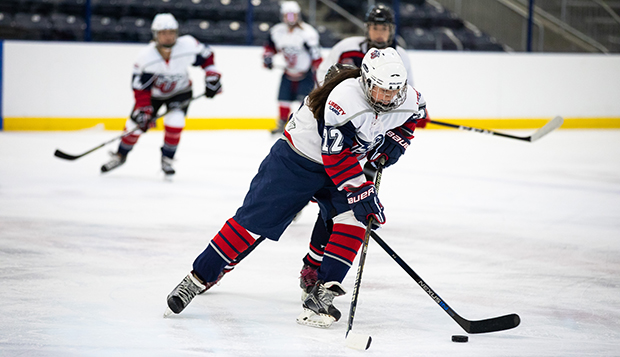 Liberty forward Kira Rice skates the puck up the ice in a recent home game. (Photo by Jessie Rogers)

Graduate forward Catharine Burrell netted a hat trick, her first since playing for the Lady Flames at the Division I level, and Liberty University's ACHA Division II women's hockey team completed a sweep at College Hockey East (CHE) opponent Pittsburgh with a 5-0 shutout of the Panthers on Sunday morning at the UPMC Lemieux Sports Complex.

After a scoreless first period, Liberty (4-0) racked up three goals in a span of less than three minutes to seize a 3-0 lead, sparked by Alexis Early's score assisted by Chelsey Greenwood at the 5:39 mark. Paige Arnosti capitalized off an assist from Burrell on the ensuing faceoff to make it a 2-0 contest nine seconds later before Burrell finished feeds from Arnosti and sophomore forward Brittany Hegele with 2:45 remaining in the period.

Burrell finished another assist from Arnosti with 11:54 left in the third before capping the scoring unassisted with 2:47 to play.

Senior goalie Kelly Hutton saved all 20 shots she faced to record the shutout.

Liberty more than tripled the Panthers (3-6) with 63 shots on goal for the game.

In Saturday night's opener, the Lady Flames only outshot Pittsburgh 30-17 and Hutton made 16 saves in a 3-1 victory.

Arnosti opened the scoring with 11:28 to go in the first period off assists from Hegele and junior defenseman Holly Turner. The Panthers tied the game at 1-1 in the second on Breanna Doherty's goal assisted by Kristine Earl less than four minutes after the opening faceoff. But Hegele gave the Lady Flames the lead for good at the 9:40 mark off an Arnosti assist.

Greenwood provided an unassisted insurance goal to complete the scoring with 4:13 remaining in regulation.

The Lady Flames have finished their fall schedule and will next return to the LaHaye Ice Center to face a North Carolina U19 team on Jan. 19-20. 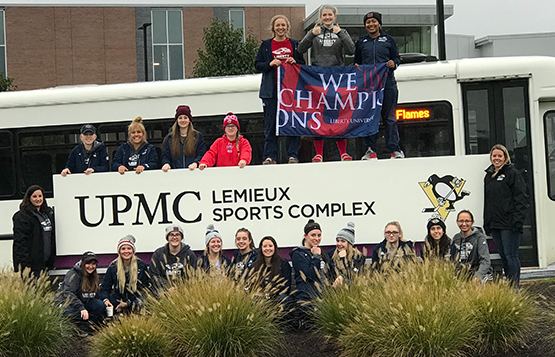