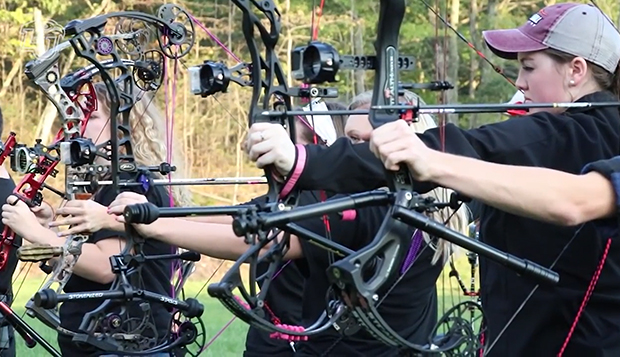 Liberty University's men's and women's archery teams will compete for the first time in the USA Archery 3D National Championships hosted by the Archery Shooters Association in Foley, Ala., with individual rounds set for Saturday and team competition on Sunday.

The Flames and Lady Flames will be represented by 14 archers in a field of more than 300 from 30 colleges and universities around the country. That is approximately 100 more than last year's event organized by U.S. Collegiate Archery in Illinois, where Liberty's trio of Jason Lynch, Spencer Foster, and Louis Boyd captured the men's bowhunting national title. This weekend, Lynch will be the Flames' only men's bowhunter competitor as Foster and Boyd moved into the men's compound division.

The range in Foley, Ala., located on the Graham Creek Nature Preserve, features three different 20-target 3D courses on over 100 acres of protected wetlands. Liberty Head Coach Ian Rigney has competed there before and said it may still have areas of flooding from Hurricane Michael that swept through the area two weeks ago.

He is confident his team will excel regardless of the conditions.

"We set our 3D course up at the shooting sports facility back in the woods at Liberty Mountain so that our athletes know exactly what to expect when we get to Foley," Rigney said, noting that a new outdoor field range was set up similar to what the archers will use for Sunday's more spectator-friendly team event.

Results will be posted on the USA Archery website.