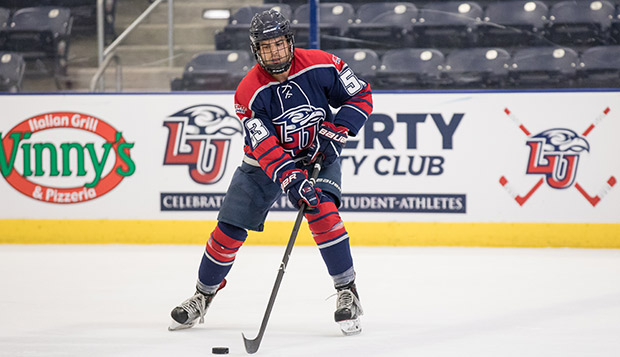 Junior forward Drew Crilly scored the Flames' first goal of the second period for a 5-0 advantage. (Photo by Joel Isimeme)

Liberty University's ACHA Division II men's hockey team established a 4-0 first-period lead en route to a 9-1 triumph over Virginia Tech in the opening game of the best-of-three Battle of the Blue Ridge, Sunday afternoon at the LaHaye Ice Center.

The Flames (4-3) got goals from eight different players, and sophomore forward Adam Partridge allowed just one shorthanded score in the lopsided victory.

Freshman center Peyton Nash opened the scoring and senior forward Eric Masters capitalized on a power play before freshman forward Austin Barlass stretched Liberty's lead to 3-0 in the first period. Sophomore forward Blake Flanders capped the first-period scoring by picking up a loose puck in the defensive zone and accelerating through the middle of the ice before cutting back and finishing a backhanded shot through the five-hole.

After Virginia Tech missed a golden scoring chance, Liberty capitalized on a counterattack to stretch its lead to 5-0 in the opening minute of the second period when junior forward Drew Crilly received a pass from senior center Matthew Perri and beat Christian Ciraco with his shot from the right crease.

Then, with the Flames on a power play, both teams scored — the Hokies shorthanded before Liberty pushed the score to 6-1 in the final nine seconds of the man advantage as Perri finished a feed from Crilly.

The Flames extinguished a five-on-three power play by Virginia Tech and extended the lead to 7-1 with a shorthanded goal at the end of the second period when Flanders jammed home the rebound of a breakaway opportunity by Flames defenseman Kyle Martin.

The Flames have Homecoming Weekend off before hosting Mid-Atlantic Collegiate Hockey (MACH) North Division opponent Rider at the LaHaye Ice Center on Oct. 26 and 27.